Kayaking The Danube Canal In Vienna

Are you interested in kayaking a former arm of the Danube river in the heart of Vienna? Here is how to spend a lovely day kayaking the Danube Canal and catching views of the city along the way!

The Danube Canal is 17 kilometers long and crossed by five rail bridges and fifteen road bridges.

The Danube’s former arm forks off just after reaching Vienna’s northwest at Nussdorf Weir in Döbling. It reaches the Old Town of Vienna and rejoins the Danube on the southeast side of the town, at Praterspitz, in Simmering.

Regulated as a water channel during 1598-1600, the Canal is relatively narrow. For centuries, the Danube Canal was essential for passenger and cargo transportation.

In the 19th century, using the Canal for shipping failed as Vienna grew, and the transport was transferred to the Danube River.

The Danube Canal was defined as a leisure and entertainment area in 2005.

In 2010, a new ship station was opened at Schwenedplatz, and a fast ferry to Bratislava was launched.

Both sides of the Donau Canal are used for cycling, walking, jogging, or skating. During the summer months, there are flea markets and music events.

Summary of Our Kayaking the Danube Canal Trip

We’ve paddled a few sections of the Danube river, and we also wanted to discover the Danube Canal, its former arm. The weather was promising on a Saturday morning, so we drove to Vienna, wishing for a great paddling day. The best thing: we didn’t paddle too much; we just left the flow carrying us along the canal while admiring the views.

Getting to Nussdorf Weir

We left the car at Albener Harbour, near the bus station, in front of a farmer’s house. We even asked the guy if we could leave the car there, and he seemed surprised. “It’s free parking, so you shouldn’t ask,” he answered. Well, we know that, but with many being so territorial, you never know!

We waited no more than 5 minutes and jumped on a bus to Vienna downtown. The connection to Nussdorf wasn’t as easy as expected. After leaving the bus, we headed to the metro station, which was quite crowded for a Saturday morning. Last, we took a tram to reach our final destination, Nussdorf.

It was the first time we moved using three transport forms, and carrying a trolley didn’t help eighter. 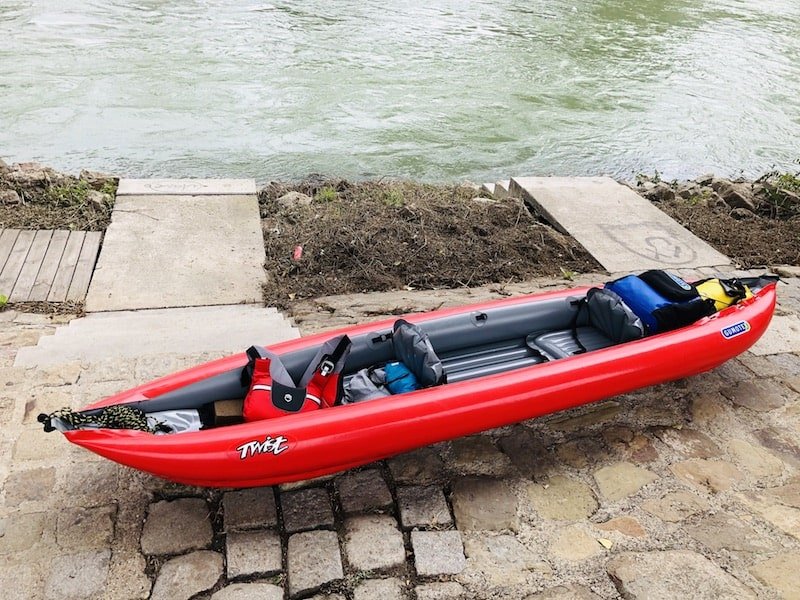 The Nussdorf Weir was built between 1894 and 1899 to protect the canal from floods. Depending on the time of year, a volume between 80 and 225 m³/s of feedwater must be provided to the Danube Canal, with up to 132 m³/s being possible.

Reaching the Nussdorf Weir was quite easy, and we were glad that we finally got there. Since we weren’t in a hurry, we sat on a bench for a while and enjoyed a great latte bought from a coffee house near the tram station.

We began to inflate our kayak, and the preparation didn’t take long, and shortly, we had some witnesses near us, asking all kinds of questions, but mostly, where our final destination is.

The launch area was clean, so we could easily drop our kayak into the water. Although the stairs were steep, that didn’t annoy us too much. One last view of the beautiful Art Nouveau bridge of the weir, and we were already floating the Danube Canal. 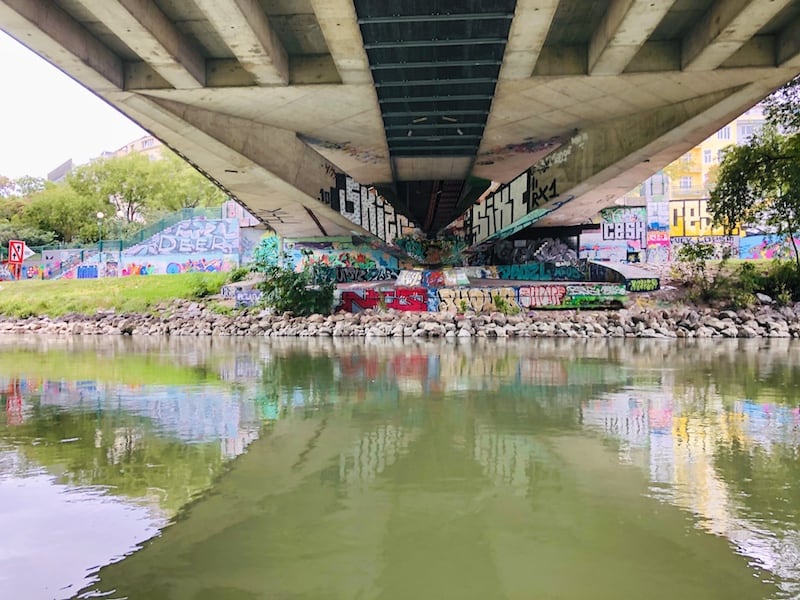 Soon after the departure, we realized that we were carried downstream on a fast flow, so we didn’t put too much effort into paddling. Instead, we began admiring some of the graffiti bits on the shores. You could spot some graffiti here and there, but they kept to the concrete for the most part. While some seem to be annoyed by this so-called art, we enjoyed this young’s way of expressing themselves.

Once again, passers were taking pictures of us from the sidelines. Children were running and asking for a photo, adults wishing us “bonne voyage” and the elderly waving us. It was funny as we didn’t experience that before. We never imaged that our inflatable kayak could make such waves in Vienna’s downtown.

While kayaking the Danube Canal, we began to count the bridges but soon after, we abandoned the idea as the city’s views were lovely, and we just wanted to embrace that.

After passing a few bridges, we recognized on the right-hand side-shore the Park&Ride Spittelau, the popular and pocket-friendly parking in the middle of the city. Next to the building, a big tower and a charming colorful building were visible from the water. Since the building looked so appealing and we knew nothing about it, we googled it. I can’t tell you our surprise when we found out this fancy place is actually a waste incinerator!

And guided tours in English and german are possible by emailing them! What a brilliant idea to bring elegance and recycling in one place!

Back in the 1990s, the section between the 2nd and 3rd districts of Vienna was exploited for recreational purposes. Now, the area is lined with beach bars, places to eat and drink. There are many spots available exclusively to the waterway, a definite must-see in summer. At night, the area becomes more alive as the bridges are lightened in blue.

We passed by many buildings, restaurants, and terraces. People were constantly waving and taking photos of us.

During this pandemic year, the ferry leaves once a day in the morning so that we couldn’t encounter the monster on our route to the Danube river. But always check and double-check its schedule as you don’t want to paddle at the same time as the Twin City Liner!

Right after the ferry terminal, we bumped into the small Vienna River that winds past the Schönbrunn Palace all the way to City Park. The river meanders partially underground and joins the Danube Canal near Schwedenplatz. If you’re kayaking the Danube Canal, take a short detour on the Vienna River.

We’ve been kayaking for more than 7 kilometers by now. A small tour boat was coming upstream, so we decided to join the Vienna River. Unfortunately, we could paddle for a few hundred meters only as the water was shallow, and we had to return. It’s the few times we really paddled. Next to the bridge over the Vienna River, a few fishermen waived us and asked us where we are going. 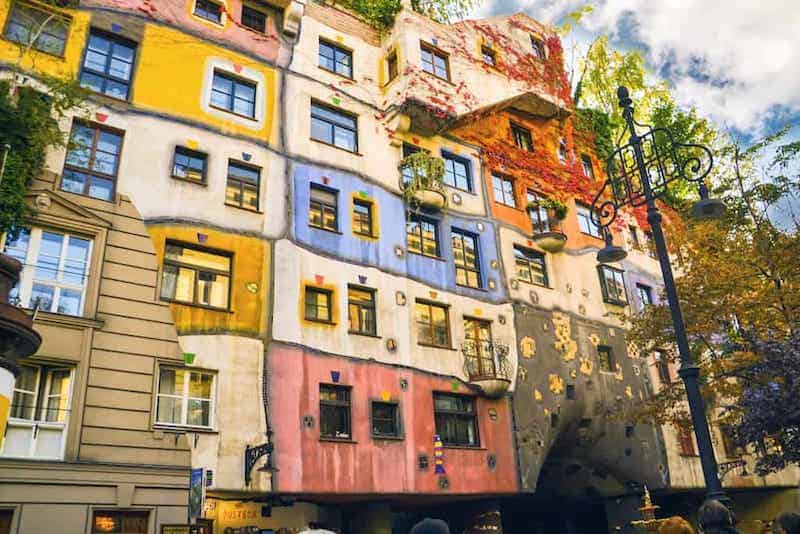 We were floating for a while, and we were looking for a place for lunch. The steeps on the shore didn’t look so appealing for our inflatable kayak, and after checking google maps, we realized we were coming close to Hundertwasserhaus. We kept our eyes open for a friendly disembarkment point, and once we found a proper place, we pulled the kayak out of the water. We placed it on the trolley and headed to one of the terraces near the Hundertwasserhaus.

The colorful and unusual house designed by Friedensreich Hundertwasser attracts tourists from all over the world. Do I have to mention that the two of us dragging a trolley with a kayak in the middle of the city were also an attraction? We posed for some tourists, and since the weather was beautiful, we just wanted to enjoy our afternoon in the city! The guy serving us was also curious about our route. We were its first guests arriving by water at his restaurant! 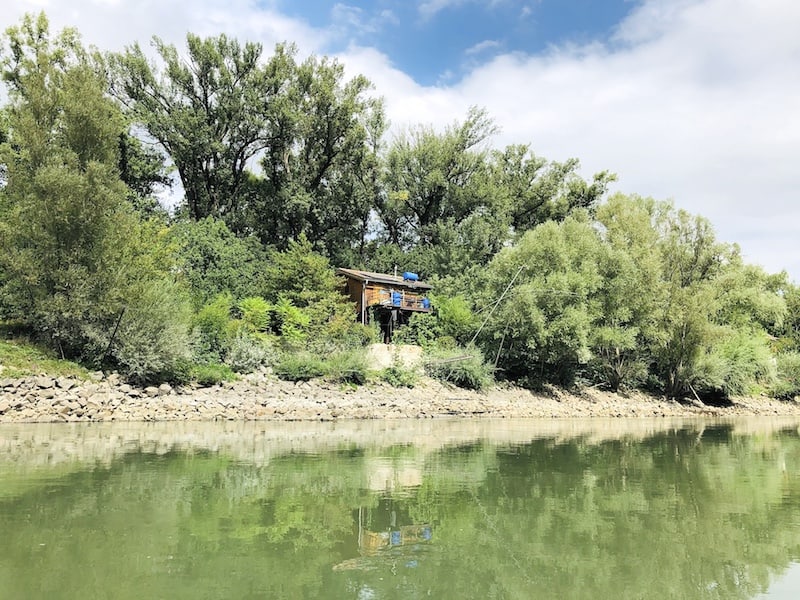 After a delicious lunch, we launched our kayak and continued our route. By km 9, we left the residential area behind, and besides some noise coming from the highway, the course was peaceful.

At km 12, we reached the huge OMV infrastructure, and soon after, we came across the familiar fishermen’s houses. This summer, while kayaking the Thaya and Morava River, we’ve seen this kind of fishermen’s house for the first time, typical for this region. It might be challenging to paddle through the wires and fishing nests; fortunately for us, we didn’t see many fishers this day.

At some point, it was so silent that we got scared by a deer coming out from the bushes. We spotted it, but it was hard to catch the deer with the phone camera. 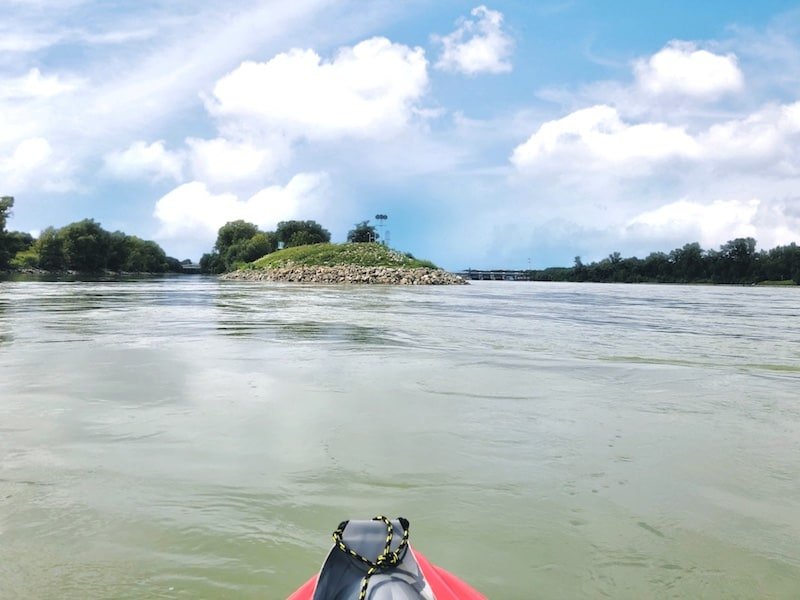 The final stretch to Pratespitz: no arm tiredness due to lack of paddling! The weather was beautiful, and we were floating in complete quietness. We were starting to feel sorry that our journey was coming to an end.

As we were getting closer to Praterspitz, we knew we had to paddle downstream to reach the shore stairs. To our surprise, those were entirely occupied by fishermen, and they started to look odd as we approached. None of them made any effort to let us use the stairs, so we had to struggle to pull out the kayak on an unfriendly rocky area. What was I saying earlier about some being territorial? 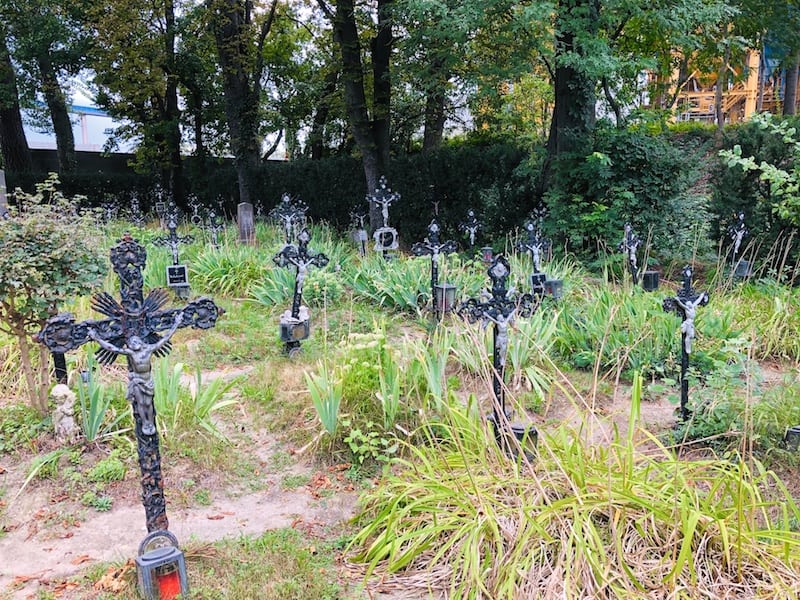 After packing everything, we headed to our car, passing an industrial property with two huge cereal storehouses.

But before that, we made another interesting stop, this time at the Nameless Cemetery. From what I’ve read, there are buried unknown people who drowned in the Danube river between 1840 and 1940. Many of the bodies remained unidentified, hence is the name: nameless. While the older part lies abandoned, the new section is easily recognizable as a wall surrounds it. A family is taking care of this place since 1933. We strolled for a while around the area, reading the crosses and snick picking inside the small chapel.

Kayaking The THAYA & MARCH/MORAVA From Breclav (CZ) To Marchegg (AT)

Are you on Pinterest? Save this Pin for later! 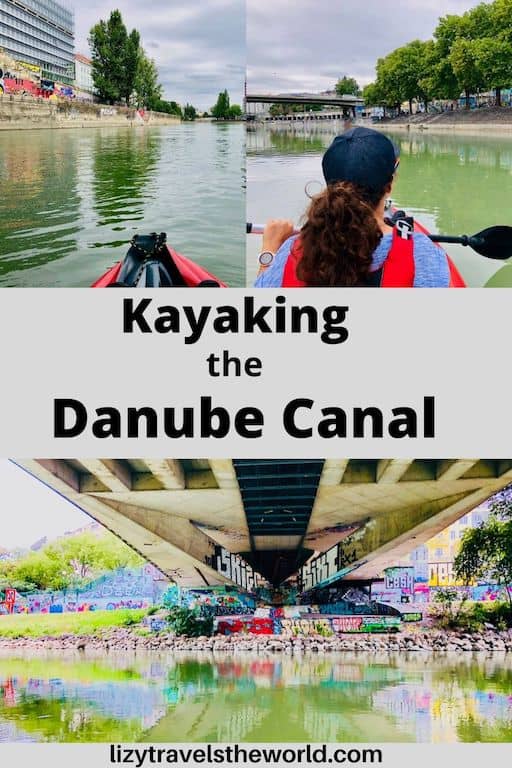