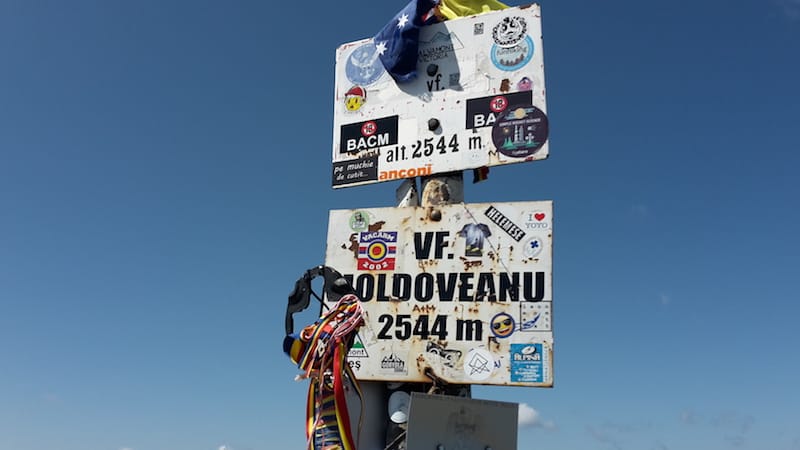 What better way to escape the daily routine than spending time in the mountains? We decided to spend a gorgeous late summer day hiking Romania’s “ROOF”: MOLDOVEANU PEAK. Although it was a beautiful and enjoyable experience, it was also a physical challenge. We performed 30 kilometers in 14h40′, with several rests included. Will we do it again? Definitely, but maybe we would break the hike into two parts and spend the night at Podragu Cottage. If you want to find out how to get to Moldoveanu Peak on a day hike from Balea Lake, read the complete article!

Have you watched the episode of the popular TV show Top Gear where Jeremy, James, and Richard drive some fantastic cars on the Transfagarasan Road and declare it one of the world’s most scenic drives?  Well, here it is, one of the best roads in the world, only 100 kilometers from Brasov!

The famous road was built between 1970 and 1974, under Ceausescu communist regime, to guarantee a secure way through the Carpathian mountains. It starts at Cartisoara, in the north and ends at Bascov, in the south, covering 150 kilometers. Now is a popular weekend and holiday destination among Romanians and tourists from different parts of the world.

Coming from Brasov, you will be driving on Transfagarasan road only from Cartisoara to Balea Lake, for 30 kilometers. Balea Lake is situated at 2.042 meters altitude, which means this spectacular section is closed from October to June due to extreme weather conditions.

As we already visited Brasov and made a couple of day trips from here, we wanted to spend some time in the mountains. We double-check if the weather forecast would be okay for the weekend, so we packed our bags and hit the road. Before heading to our accommodation, we decided to drive the famous Transfagarasan road that crosses the Fagaras Mountains.

The road was easy to access from Brasov, and the ride up was epic, with sharp turns that drove us up to 2.042 meters. In the beginning, the road had a few corners, revealing nothing spectacular. Suddenly, the scenery changed entirely, and we were blown away by the beauty of the mountains in front of us. We stopped a few times, took plenty of photos, and admired the landscape and the views over the valley.

Once we arrived at Balea Lake, the first thing that drew our attention was a young married couple, originally from Rusia, who decided to take some wedding photos dressed as groom and bride. Since it wasn’t a common thing to see on top of the mountain, few tourists stopped and wished them all the best. Once we enjoyed the views and spent some time at Balea Lake, we drove down to the accommodation.

Indeed Transfagarasan Road is one of the most amazing roads in the world so you should give it a try the day before or after the ascent. 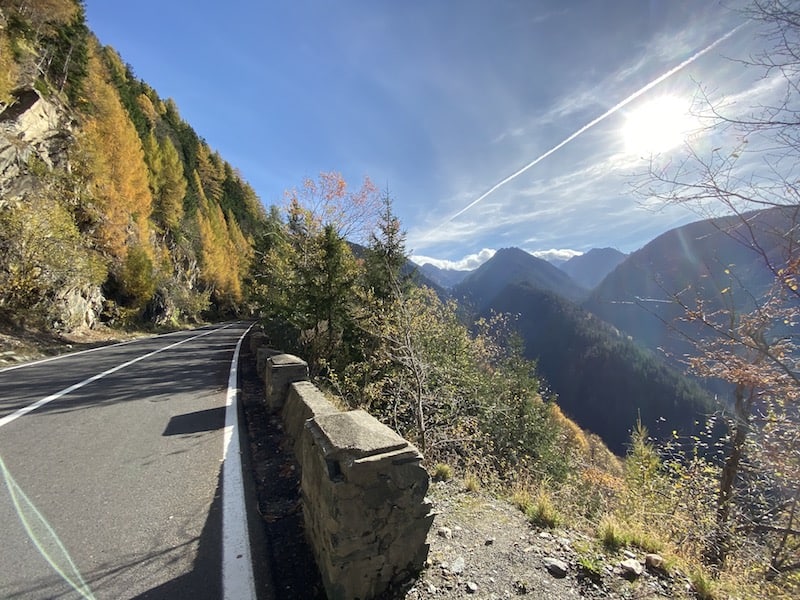 We chose to stay at Albota Farm – a compound with a vast trout farm, a guest house, and a large restaurant with a terrace. There are horseback riding facilities, angling options for children and adults, and a store with homemade products. We loved the rustical Romanian ambiance, the quietness of the area, and the traditional food, which was delicious. During our stay, we encountered many families with children, paragliders, and tourists from all over the world.
We went to bed early that evening, right after savoring a delightful dinner and packing our essentials for the ascent.

Note. If you also plan one day hike to Moldoveanu Peak, you can spend the night closer to the ascending point, at one of the cottages near Balea Lake, and save half an hour. Or you can camp at Balea Lake as the majority does. 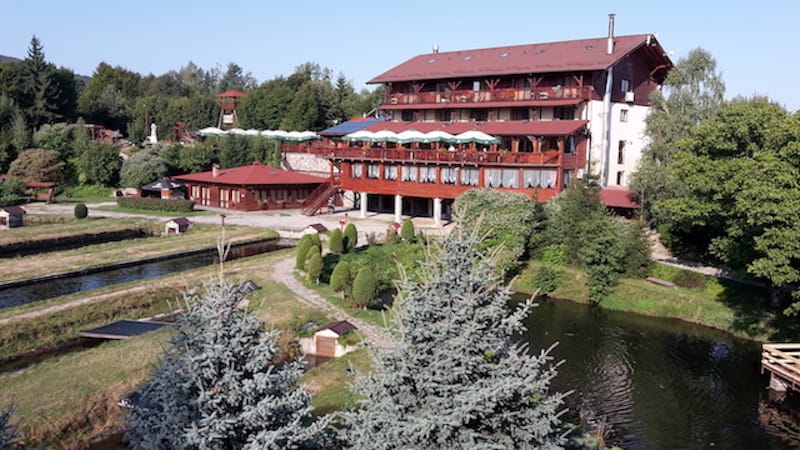 We woke up early that morning, and by 6 am, we were already at Balea Lake. With no one around at that hour, we quickly found a place to park the car, took our belongings, and began our ascent from Balea Cottage. The first part of the climb is quite challenging, mainly being steep and less visible in the early morning. It took us no more than 30 minutes to reach CAPRA SADDLE(Saua Caprei), and on our way up, we were greeted by a beautiful chamois.

The few tourists who spent the night in a tent at Capra Lake were still asleep. We tried to be as quiet as possible and not wake them up. After admiring the place’s beauty and appreciating the silence, we bypassed the Capra Lake on the left side and followed the path. Unfortunately, the trail is not well signposted, but we knew we had to head east.

We walked on a rim for 2.5 kilometers from Capra Lake, up and down, until we reached a junction of two trails. We ignored the path to Podragu Cottage (Cabana Podragu) and headed instead to THREE STEPS TO DEATH (La 3 pasi de moarte). By now, we’ve made some good friends, two lovely dogs who followed us all the way up to Vistea Mare.

Soon we reached a section of slippery rocks and iron chains, which we had to pass over. Luckily we knew about this part and brought gloves, which made the ascent easier.

Note. Be careful in this section; it’s quite challenging and slippery. I’ve heard some ugly stories about people who fell here. Keep in mind that you might find it more demanding on your way back when you’re already exhausted.

Next, at NERLINGER MONUMENT, we came across another tricky descent with slippery rocks, which seemed like it never ends. We realized we were getting closer as we were able to see Moldoveanu Peak for the first time. And it looked so beautiful and so far, but we didn’t give up! We pushed ourselves, and on our way to the Vistea Mare, we passed some gorgeous mountain lakes, Saua Vartopului and Saua Podragului.

Another difficult part before reaching Moldoveanu Peak is the VISTEA MARE ascent. Rocky, slippery, and challenging. We were already eager to reach the summit, but we found this part very tricky. Another half an hour and we were already on VISTEA MARE PEAK, at 2.527 meters, the third highest peak in Romania.

Another 20 minutes from Vistea Mare Peak, and we approached the summit. After 15 kilometers and 6h40′, at 12.40, we reached the highest point of Romania, MOLDOVEANU PEAK, at 2.544 m altitude! What a joy! We took a well-deserved rest, ate for the first time and enjoyed the view and the silence.

The route back was the same, but the motivation was gone. There are many steep climbs and descents on the way back, but the walks along narrow ridges are gorgeous. It took us another 6 hours to reach Balea Lake. And the last section, Capra Saddle, was challenging once again since the sun began to set.

Things to keep in mind before the ascent 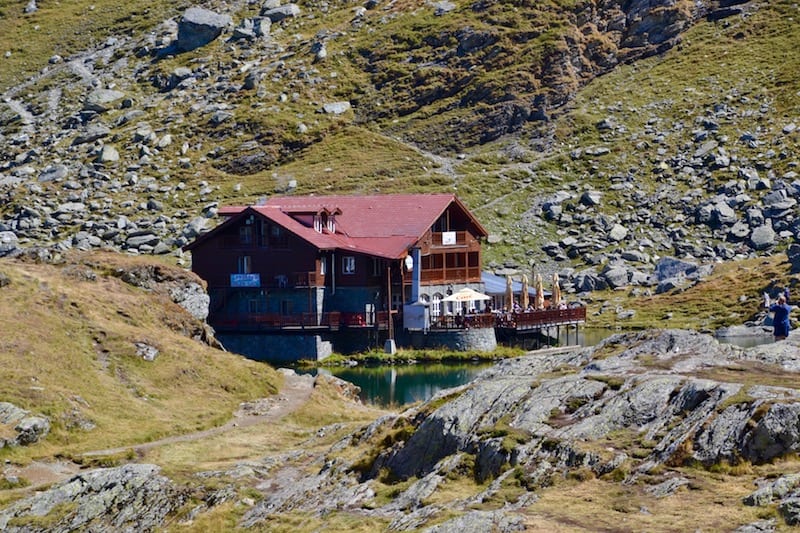 Are you on Pinterest? Save those Images for Later! 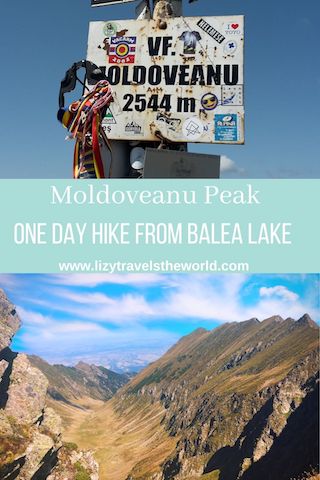 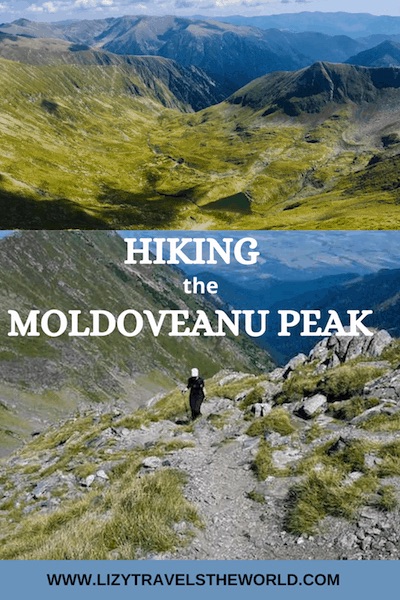 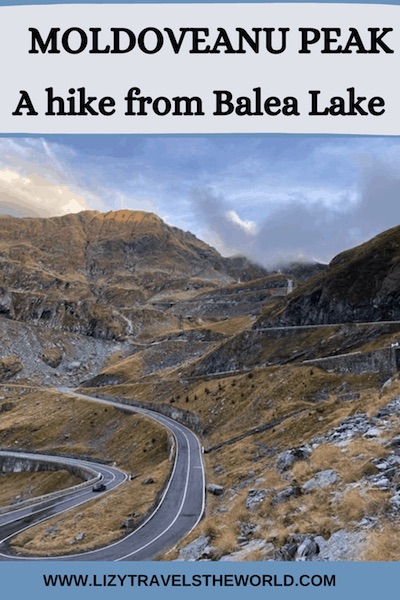 A COMPLETE GUIDE TO THE DANUBE DELTA

5 THINGS TO DO IN RASNOV