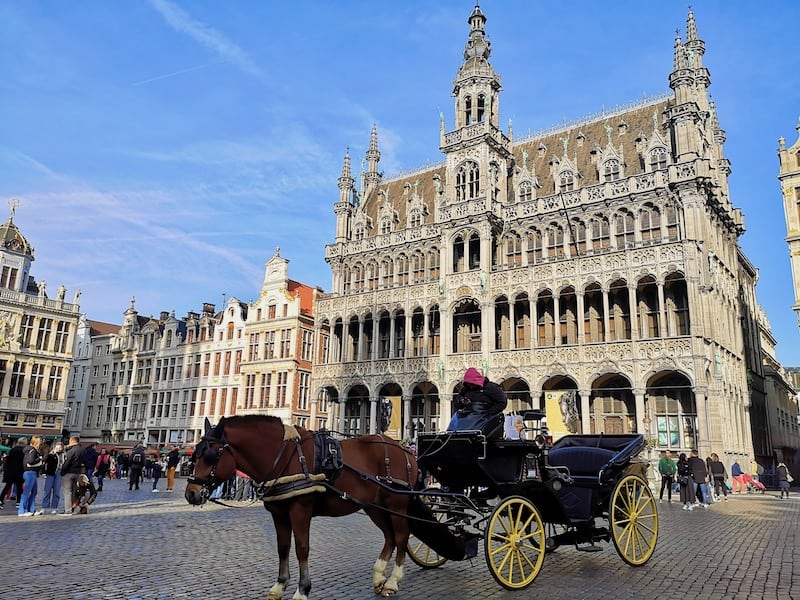 One Day In Brussels Itinerary

Despite being the capital city of Belgium and home to the headquarters of the European Union, Brussels is actually pretty small. Therefore, spending one day in Brussels is the perfect amount of time to get a sense of the city and explore the main sights.

Although sometimes overlooked in favor of Bruges and Ghent, the Belgium capital has more than enough things to do and places to visit.

For our extended weekend in Brussels, we chose to stay at a hotel in the heart of the European Quarter, only 300 meters from The European Commission. From here, we took day trips outside the city and allocated one day to explore Belgium’s capital. So here is my one-day in Brussels itinerary, including top sights to see and things to try!

Disclosure: *This post contains a few affiliate links, which means I may receive a small commission, at no cost to you, if you make a purchase through my link.*

Things To Know Before Visiting Brussels

The first option is using public transportation. The tram system is one of the biggest globally, so you can cover more considerable distances by using it. A one-way ticket is valid for one hour and during that time, you can change the means of transport: metro, bus or tram.

Another option for discovering the city is hopping into a Hop-On Hop-Off Bus. You can reach Mini Europe and Atomium(a gorgeous model of an atom considered one of the Brussels landmarks) by taking the bus.

The city’s main attractions are close to one other, so exploring on foot shouldn’t be an issue for one day in Brussels. Start with a short walk through Parc de Brussels, go inside the gorgeous St. Michael and St. Gudula Cathedral, stroll the streets, have a coffee, and taste a Belgian Waffle at Manneken Pis.

I’m a big fan of e-scooter, and whenever I have a chance, I use them on my travels. We found two e-scooters parked near the hotel this time, so we rented them and headed to the main attractions. We only exploited them for reaching different places, and we walked most of our one day in Brussels.

Morning of Your One Day in Brussels Itinerary 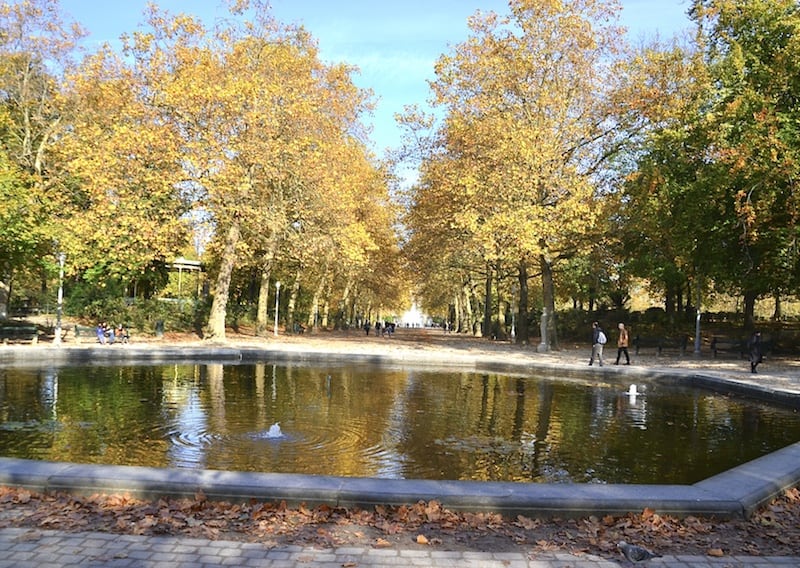 First thing in the morning, after renting the e-scooter, we headed to Parc de Brussels. Also known as Parc Royal, it stands between the Federal Parliament and the Royal Palace. The ride from our hotel took only a few minutes, but getting on foot would have taken almost 20 minutes.

We got the most out of our means of transport and strolled the Parc de Brussels pathways; therefore, we discovered two drinking-water fountains, the Royal Theatre, some gorgeous alleys, and a few kiosks. 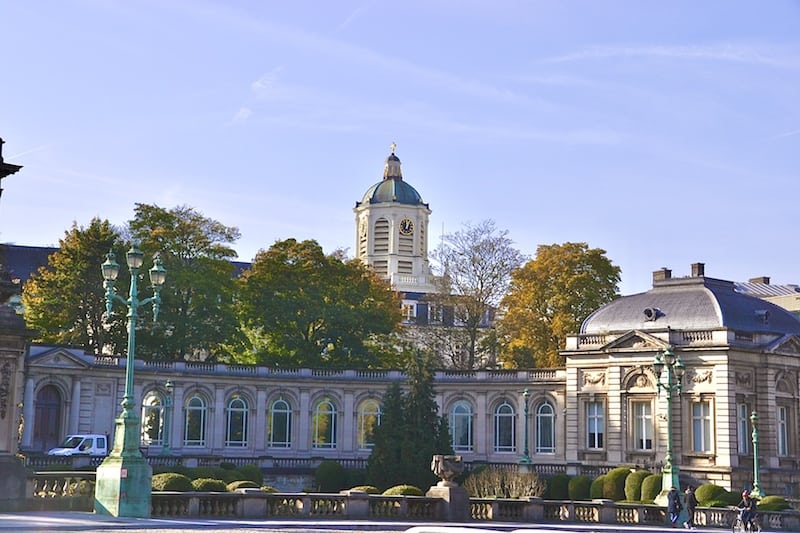 The Royal Palace was once the King family’s official palace (the official residence is now the Royal Palace of Laeken). Currently it serves as an administrative seat for the Belgium monarchy.

It is open during the summer months only, from Tuesday to Sunday; however, you can admire this beautiful building from the Parc Royal if you visit Brussels during other seasons.

After a last snap of the Royal Palace, we proceeded to Brussels Cathedral, only 500 meters away. 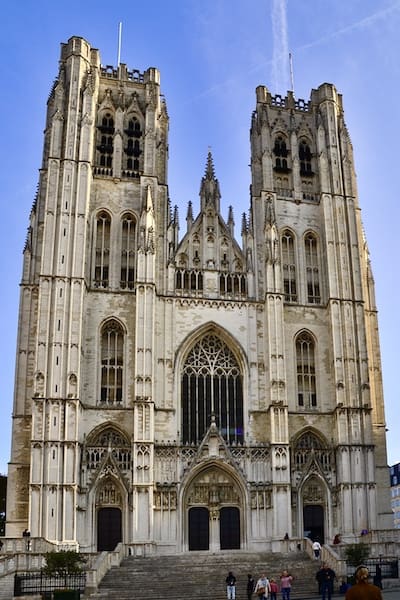 Right in the heart of Brussels, between the upper and lower town, you’ll notice the famous Brussels Cathedral, the monarchy’s favored option for weddings and coronations.

St. Michael and St. Gudula refer to the twin Roman Catholic cathedrals that dominate the charming Treurenberg Hill. It took almost 300 years to complete the building started in the 13th century.

The exterior is charming as the cathedral is made up of a granite quarry. If you take a better look, you might find some resemblance to Notre Dame de Paris Cathedral. 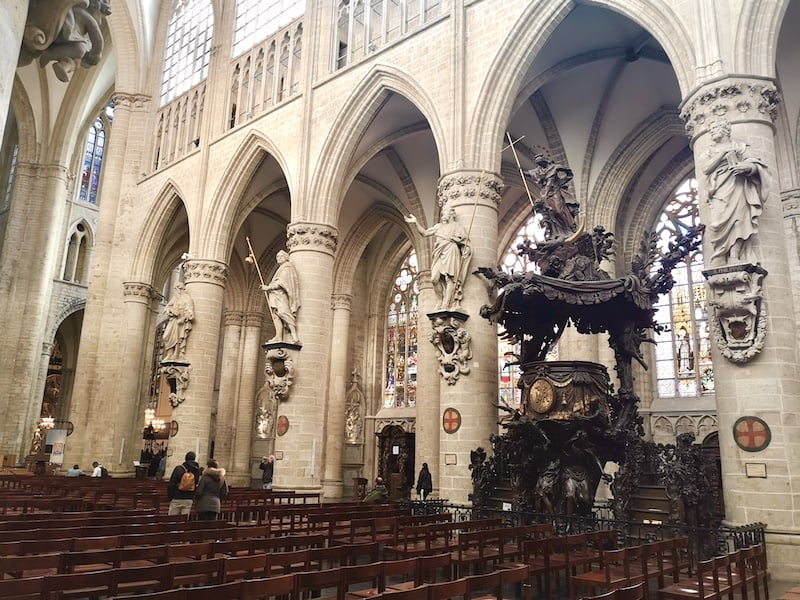 The interior is also gorgeous, with baroque-style platforms and marble altarpieces, beautiful stained glass windows, and paintings. Make sure to look for the statues of the 12 apostles and the 4.000 organ pipes.

We spent some time indulging in the serenity of this Holy place, taking photos of the interior and exterior before walking to the city center. 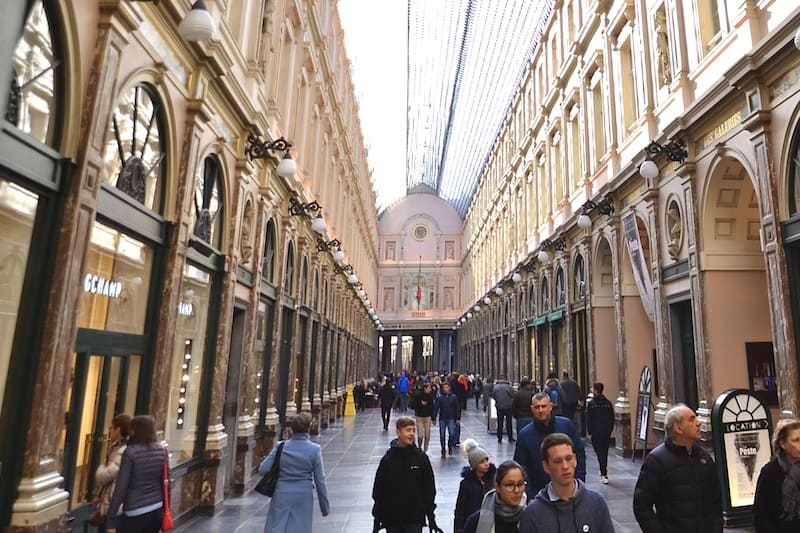 Heading to the Old Town of Brussels, you’ll bump into the Galeries Royales Saint-Hubert, built between 1846 and 1847. The combination of golden lighting and the high glass ceiling is gorgeous!

The Galeries consists of an extended covered street with shops, cafes, and chocolatiers aligned on both sides. If you are interested in shopping, it worth a quick stop.

Some of the oldest chocolate shops in Brussels are located inside the gallery, so make sure to try some. If your time allows you, take a guided tour at the Choco-Story Museum, just a few minutes’ walk from the Galeries.

Afternoon of Your One Day in Brussels 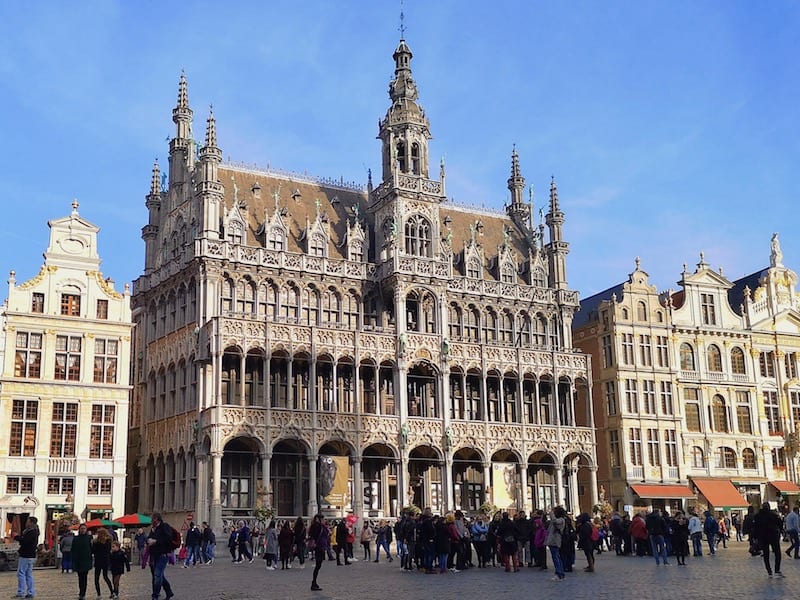 Grand Palace has been a UNESCO World Heritage Site since 1998 and is considered one of the most beautiful squares in Europe. Town Hall and Maison du Roi (The King’s Residence), two opulent buildings dating from the 17th century, surround the capital’s central square.

The Town Hall is the only remaining medieval building of the square and a masterpiece of Gothic architecture. Look for the Archangel Michael statue overlooking the square on top of the 96-meter high tower.  If you choose to go inside, keep in mind that guided tours are available each Wednesday and Sunday in three languages.

Maison de Roi is also known as the Bread House due to the bread market that has been held here for centuries. The building is now a history museum.

If there is a place to be for one day in Brussels, Grote Markt is the one: most of the time crowded and overloaded but extremely beautiful. Among the many squares we have visited, this one stands out for its gorgeous design. We immediately fell in love with the grandiose buildings’ intricate architecture, so we took some time to admire everything! 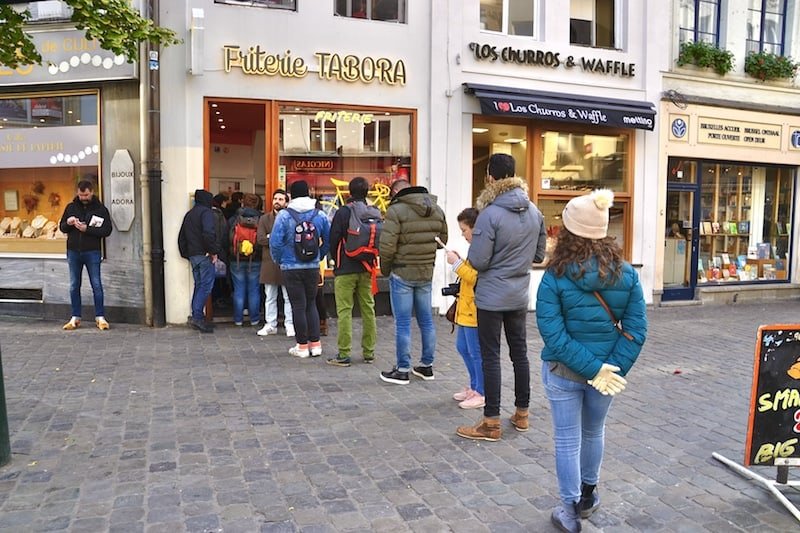 Eating fries is another must during your visit to Bruges! There are many places where you can buy this Belgian specialty, but you should taste some around Grand Palace. Crisp on the outside and sublime on the inside. Just try some topped with SAMOURAI sauce! Simply delicious!

Imagine that people are waiting patiently for more than 30 minutes in line only to taste some!

Brussel even has a Friet Museum, so head there if you are interested. 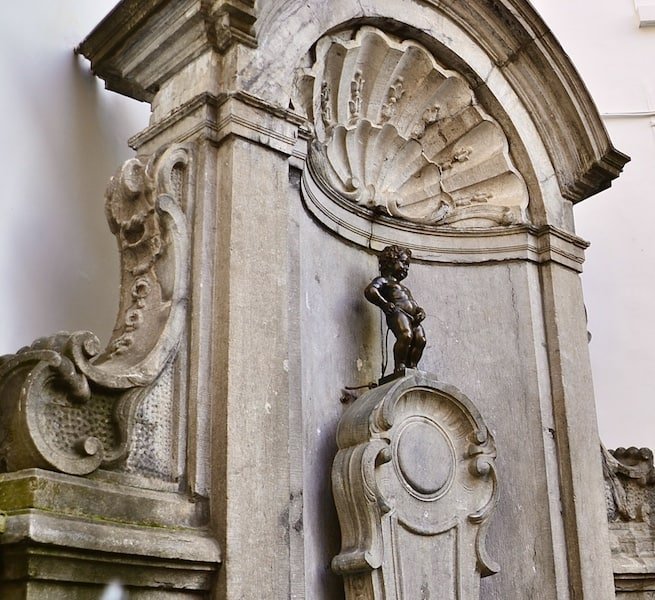 Did you know that Brussel’s symbol is a 61cm bronze sculpture portraying a naked boy peeing into a fountain’s basin? Only 300 meters away from the Grote Markt, you’ll find this famous statue. Restrained in a bit of corner near a waffle kiosk, one could easily walk by.

There are several stories about this little boy. One story says that the child disappeared during festivities, and the family searched him for days. Finally, the parents found him urinating on a street corner.

Another story says that a boy called Julen saw a burning fuse, and he promptly peed on it. Therefore, the municipality made a statue in his likeness. 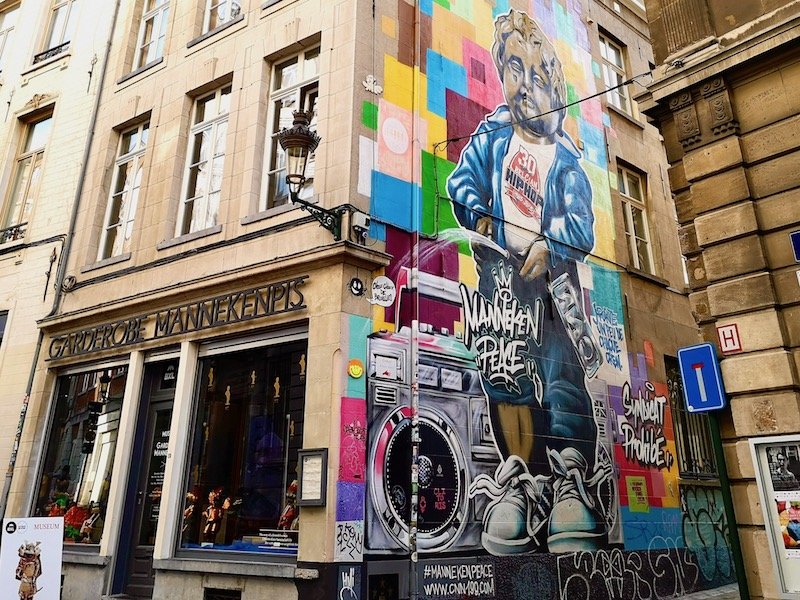 During important events, the statue gets dressed in real clothes. Can you believe that the figure has more than 900 outfits? You can witness its garderobe at Maison de Roi, in Grote Markt.

We bumped into the famous Manneken Pis on our stroll through the city. Of course, we didn’t expect the swarms of people gathering around the fountain and taking loads of photos. 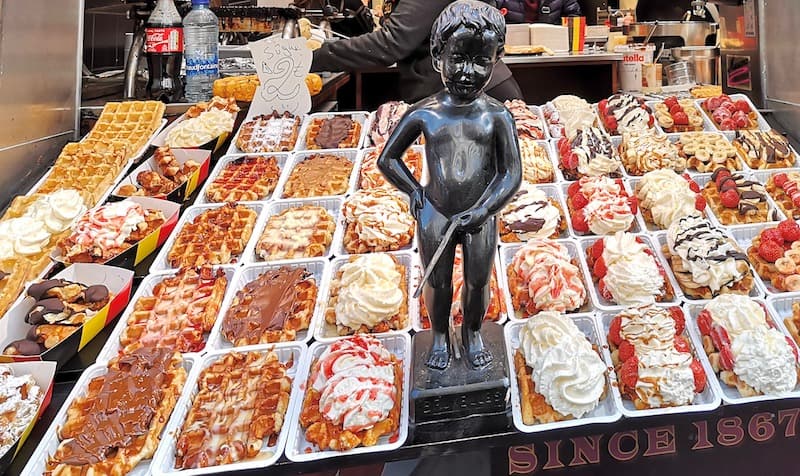 Now it’s time for an introduction to the waffles world! Belgium invited the waffles; at least that’s what they pretend. Eating Belgian waffles is a must during your one day in Brussels, so don’t you even dare not to try one! However, with such a great variety of toppings, choosing one is a challenging task!

There are plenty of places where you can try this Belgian specialty, but I would recommend getting them from a street cart that makes the waffles in front of you. Next to the Manneken Pis, there is a small shop making exceptional waffles. We tried them here, and we couldn’t be happier! We had to wait in line for a while, but the waiting was worth it! And no waffle is complete without a delicious topping like caramel or dulce de leche! 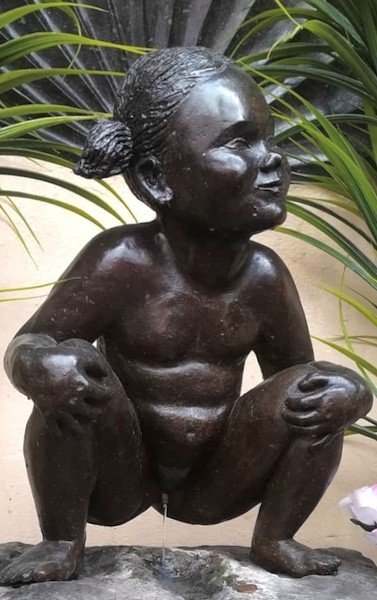 And if there is a boy, it must be a girl as well. Six hundred meters far from Manneken Pis, on the east side of Fidelity Alley, you’ll find another sculpture called Jeanneke Pis. It was made to complement the city’s famous landmark, Manneken Pis. The 50 cm high statue represents a little girl sitting and urinating. If you’ve made it till here, go to Delirium pub right next to Jeanneke Pis and have a beer; there are hundreds to choose from. 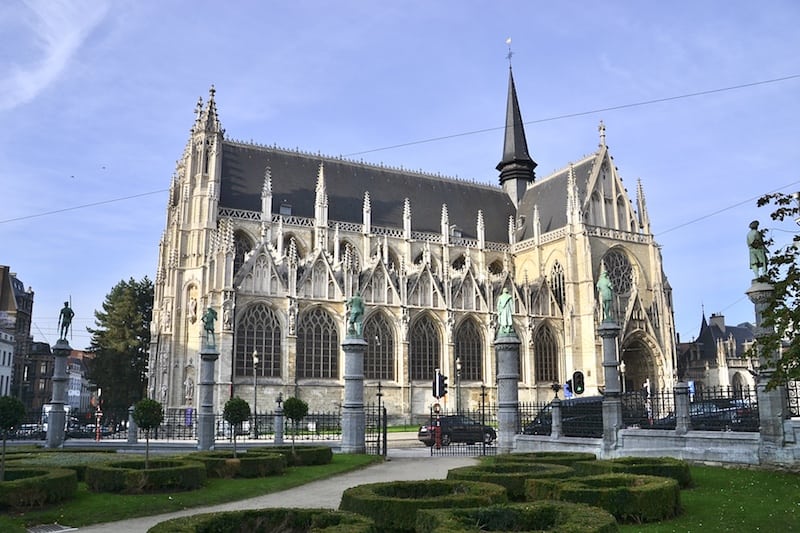 Another gorgeous Gothic cathedral in the city’s heart is Notre Dame du Sablon. It was supposed that the Madonna statue positioned inside had healing power; therefore, the church’s popularity increased over the years.

Inside you’ll see only a copy of the Madonna as thieves stole the statue at some point, and now the location remains unknown. 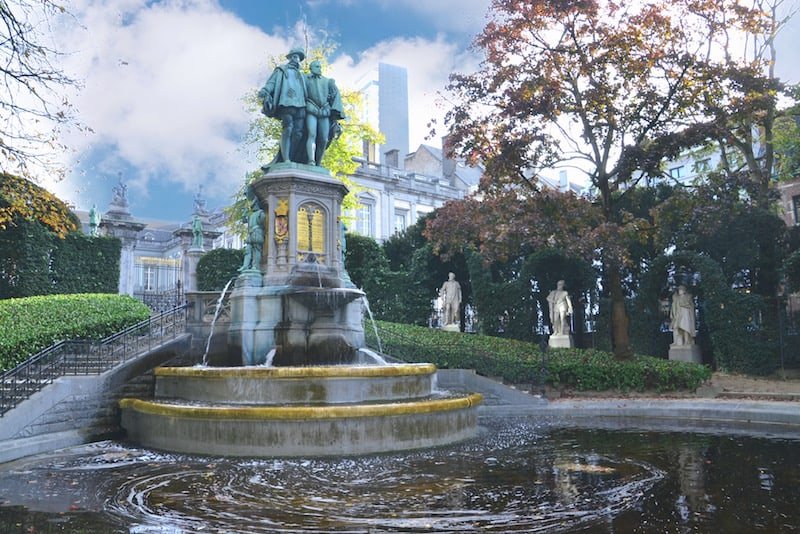 Just a few steps away from Notre Dame du Sablon sprawls the Square of Petit Sablon, one of Brussels’ most beautiful gardens.

Surrounded by 48 bronze statues dedicated to medieval professions, the square is the perfect place for enjoying a coffee away from the city noise.

The square was created in 1890 and dedicated to the memory of Counts Egmont and Hornes, executed because of their opposition to the Spanish invasion.

Evening of Your One Day In Brussels 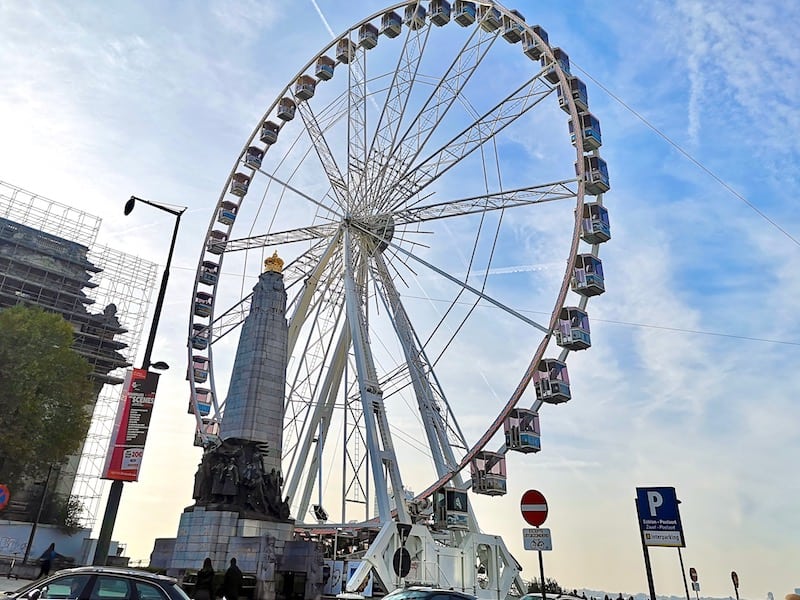 We headed to Ferris Wheel, related to the London Eye, as we craved more Brussels’ beautiful views. The wheel goes 55 meters up in the sky and offers a gorgeous panorama of Brussels. The area near the wheel is considered a gathering place for young people and one of the city’s best viewpoints. 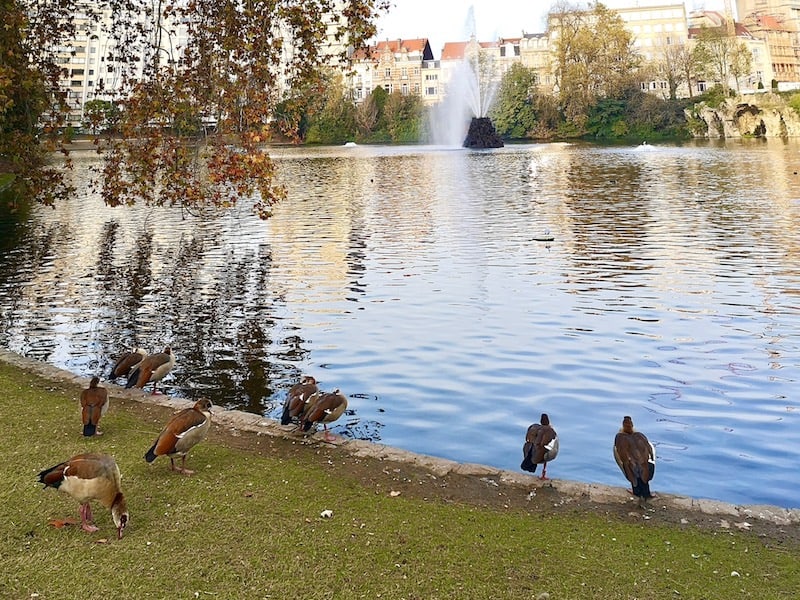 Another beautiful park with a pond in the middle, Marie Louise Square, definitely makes a quick stop on your one-day in Brussels itinerary. The remarkable trees and the exotic red-eared slider turtles which have colonized the pond make the square charming. 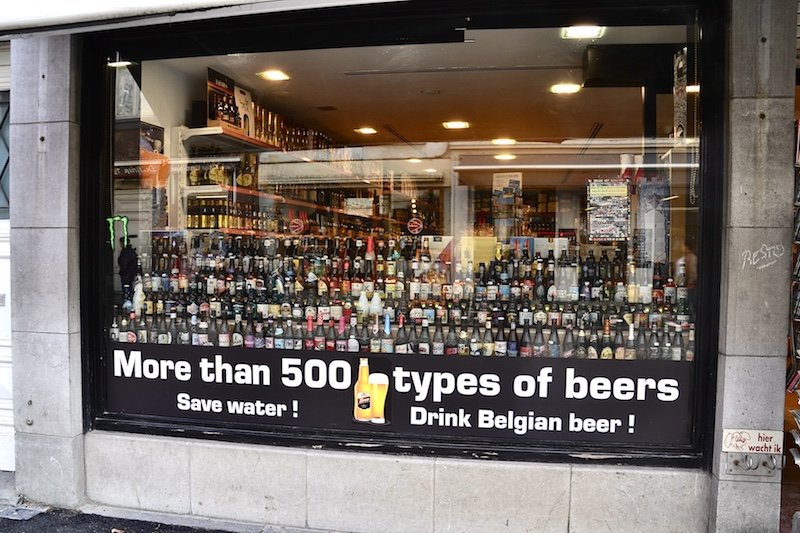 Brussel is a combination of fine chocolate and waffles, fries, and beer. A must for every beer lover is to taste Belgian beer. And in Belgium, there is plenty of beer to be drunk.

You can discover the Belgian beer culture at The Belgian Brewers Museum, take a beer tasting tour, or learn about the family-run business’s brewery process in a small shop.

Purchase a beer from a shop with more than 500 types of beers or enjoy one in a historic cellar. The opportunities are countless when it comes to beer in Belgium.

Visit 2 of Belgium’s most beautiful cities in a day on a guided tour of Bruges and Ghent. Benefit from round trip transfers from Brussels and the services of a professional guide. See an abundance of medieval monuments and picturesque neighborhoods.

BOOK YOUR GUIDED TOUR TO BRUGES AND GHENT

Interactive Map of Your One Day In Brussels Itinerary 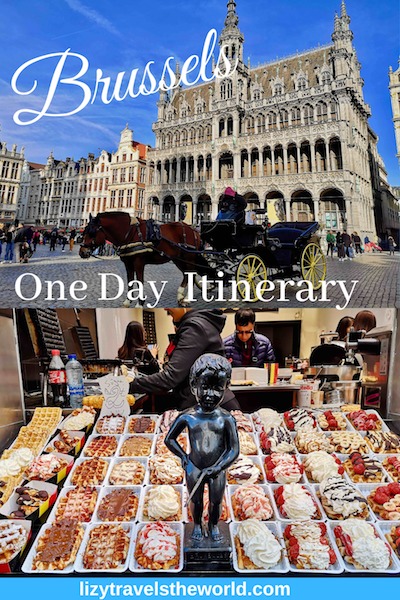 ONE DAY IN GHENT ITINERARY

ONE DAY IN BRUGES ITINERARY