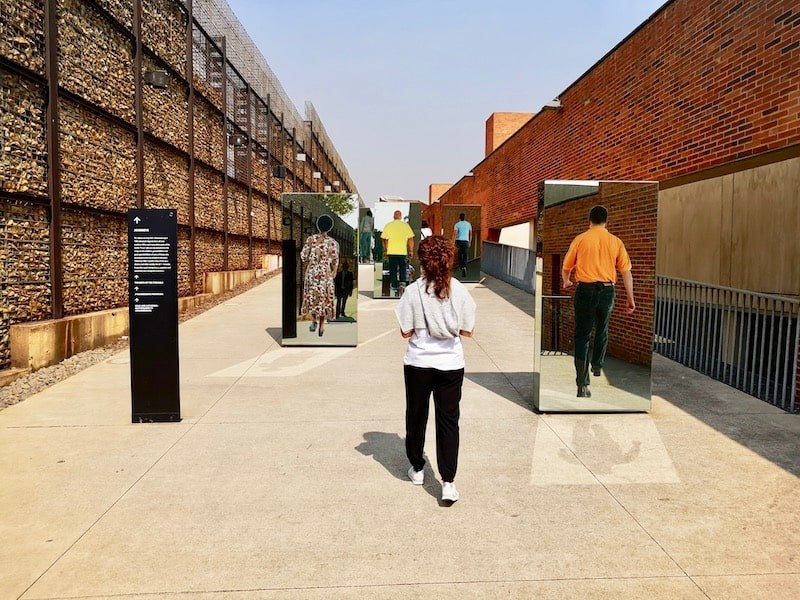 One Day In JOHANNESBURG, South Africa

Johannesburg has become a trendy destination nowadays. Tourists come from different parts of the world, spend one or two days in the capital and then head to Kruger National Park or head south, to the ocean and drive the famous Garden Route. The capital has a diverse range of historical attractions, modern shopping malls, lively nightlife, and fantastic cuisine. If you want to find out how to plan one day in Johannesburg, read the entire article!

The capital of South Africa was the epic end of our two-week road trip through the country. We flew from Europe to Cape Town, drove the famous Garden Route, and flew back home from Johannesburg at a very reasonable price; that’s how we got the chance to visit the capital as well. Being on a tight schedule, we spent only one day in Johannesburg, but it was enough to get an idea. While some skip Johannesburg, I would highly suggest not to, if you can.

O.R.Tambo International Airport is the busiest airport in Africa, with international flights from all over the world. Most of the tourists only transit Tambo on their way to Kruger National Park or Cape Town.

Getting to Johannesburg from Cape Town, Port Elisabeth, Durban, or George is easy and cheap most of the time, with many flights at various times. Mango, South African Airways, FlySafair, and British Airways are operating these routes. Considering the long distances in South Africa, a domestic flight remains the best option to travel fast and efficiently.

Note. We paid for a domestic flight from Port Elisabeth to Johannesburg 50 EUR (55 USD)/person/one way. 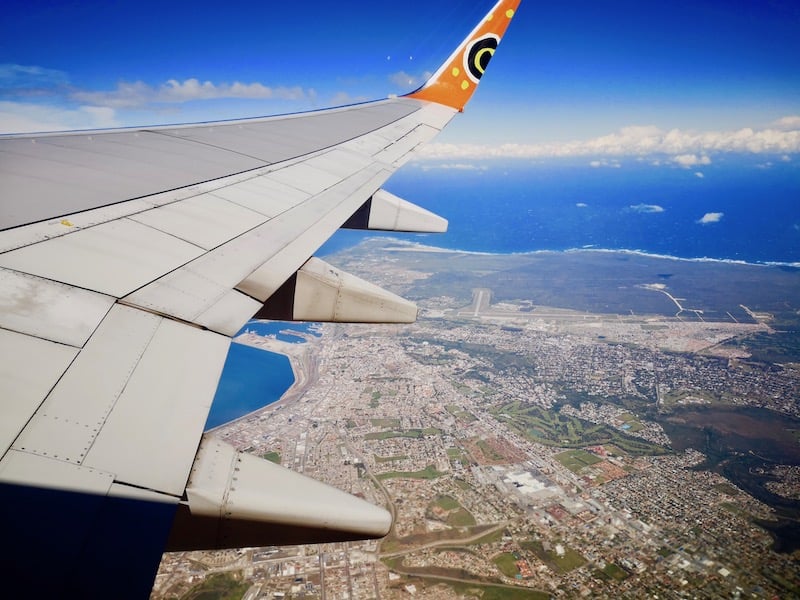 Getting to Downtown Johannesburg

O.R.Tambo International Airport lies 25 km east of the city center. Gautrain train takes you to downtown Johannesburg from 04:50 until 21:04. Gautrain stations are at Sandton, Rosebank, and Park Station. Some say it is dangerous to travel by train; some tourists are quite confident about it. We don’t know since we rented a car from the airport.

If you rent a car, you’ll reach Sandton in less than 30 minutes. If not, you can schedule an Uber for minimum stress.

The best way to visit Johannesburg is in a rented car from the airport. You get the freedom to make your plan, drive where you want, spend as much time as you want, with no stress or other limitations. The traffic is more substantial than in Cape Town but manageable; simply avoid peak travel times.

We found Johannesburg a safe town for the tourists with a rented car, which we saw a lot. Finding a parking place is not a problem, although sometimes you will be approached by some guys offering you so-called protection of the car for a few bucks. It is up to you if you choose to pay them or not. 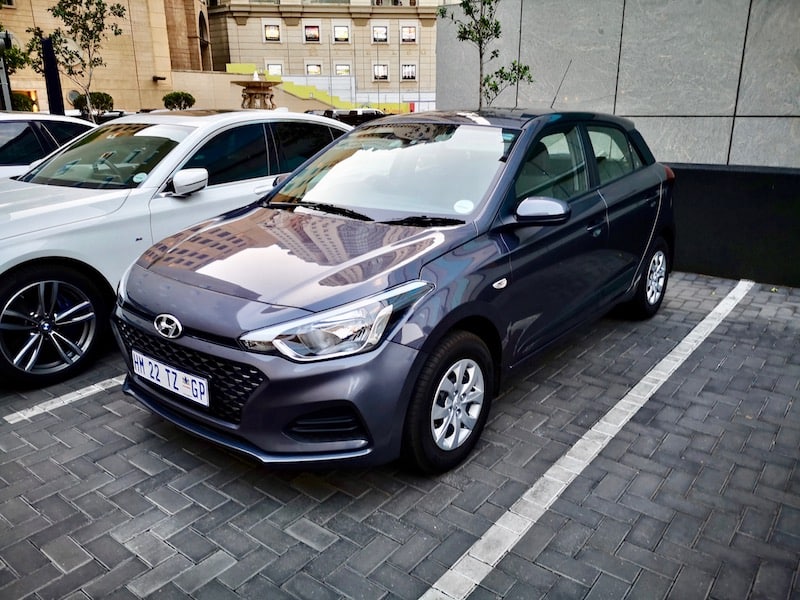 ROSEBANK and MELROSE are considered the safest areas of the city. The neighborhoods are always alive since there are plenty of vintage stores, restaurants, cafes, shops, and bars. It’s easy to walk around so you’ll see many tourists in the area. Most of the tourists choose to stay in those two areas.

SANDTON is the most important financial district in the country, which makes the area very safe. There are many restaurants, parks, shopping malls, and hotels. We chose to stay here for a short time in Johannesburg, at a hotel near Nelson Mandela Square.

MELVILLE is a university area frequented by students from all over the country. The neighborhood is fresh and lively due to the significant number of restaurants and nightclubs.

Crime, street violence, and robbery are among the concerns for travelers coming to Johannesburg. But that doesn’t mean you should skip a visit to this city. Just be vigilant, don’t walk or drive at night time and keep your valuables safe.

We rented a car from the airport, so we visited many places and drove to different locations; however, we never felt threatened or unsafe.

An excellent idea to discover the city would be hopping on a double-decker bus. With over 16 stops, you can see over 20 of Johannesburg’s top attractions. Hop On Hop Off Johannesburg has many options to choose from- one day ticket, one day bus+ Soweto ticket, one Sunday sizzler ticket, or a two-day ticket if you spend more than one day in Johannesburg.

One Day Itinerary in Johannesburg

Start your day with a coffee at Nelson Mandela Square. Situated in the Sandton neighborhood, it is a popular attraction for tourists and locals alike, with almost one million people per month visiting the place.

In the heart of this open-air square, you will find the iconic six-meter statue of the symbol for freedom, Nelson Mandela. Every single tourist stops and takes a photo of the figure.

If you need to understand South Africa, that’s the place you should visit. The Apartheid museum takes you through the history of South Africa, from 1910 when Apartheid started until 1994 when the country faced the first democratic elections. You can experience racial segregation, and you’ll get a vision of the struggles and discriminations South Africans had to endure during decades. The whole experience can be painful and emotional so take your time to assimilate all the information. 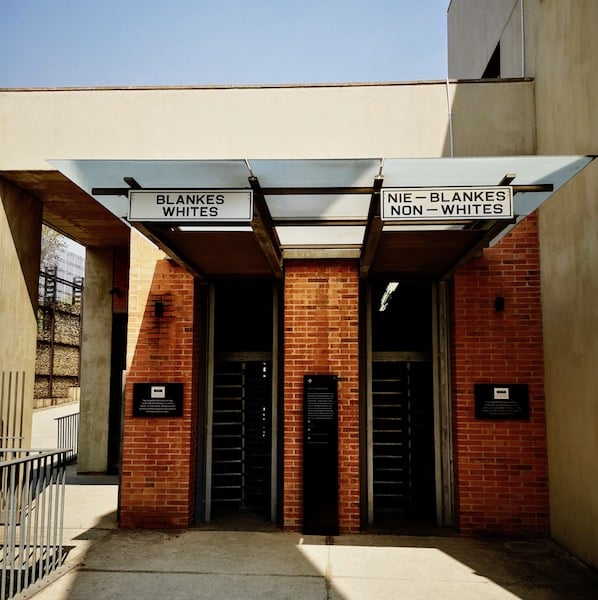 Optional. If you have more than one day in Johannesburg and are looking for some fun, stop at Gold Reef City. Situated next to Apartheid Museum, the amusement park is a great way to raise the adrenalin for a few hours.

Also known by the name Soccer City or Calabash (an African pot), FNB Stadium is a football and rugby stadium near the Soweto area. There are 60 to 90 minutes of guided tours covering the changing rooms and players’ tunnel, VIP, and the stadium’s mixed areas. If you don’t intend to visit the stadium, you will still bump into it on your way to/from downtown Johannesburg, as we did. 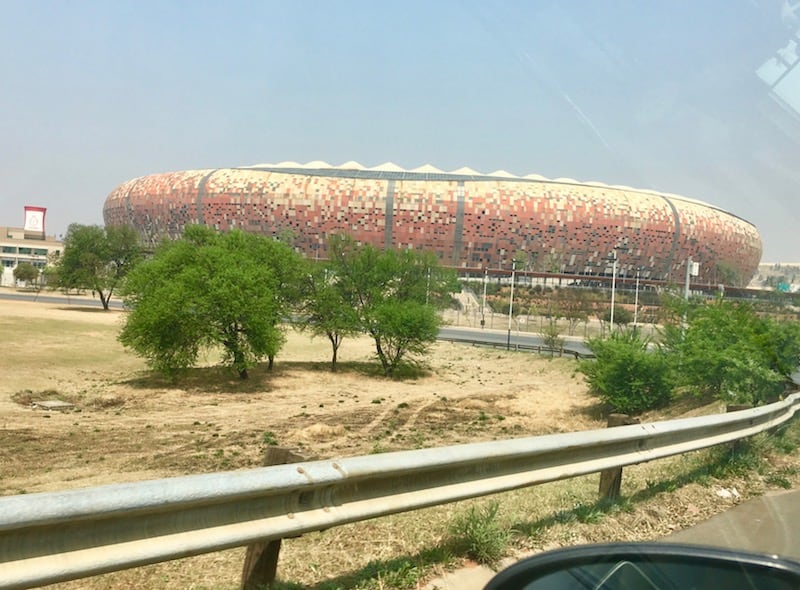 On your way from/to downtown Johannesburg, you will discover another beautiful and bright landmark of the capital: the Orlando Towers. The huge towers are painted in vibrant colors, which reflect the happy South African spirit. They are built on what was initially a coal-fired power station and came alive only in 2009. Now the place is famous for bungee and base jumping, rock climbing, zip-lining, and abseiling. 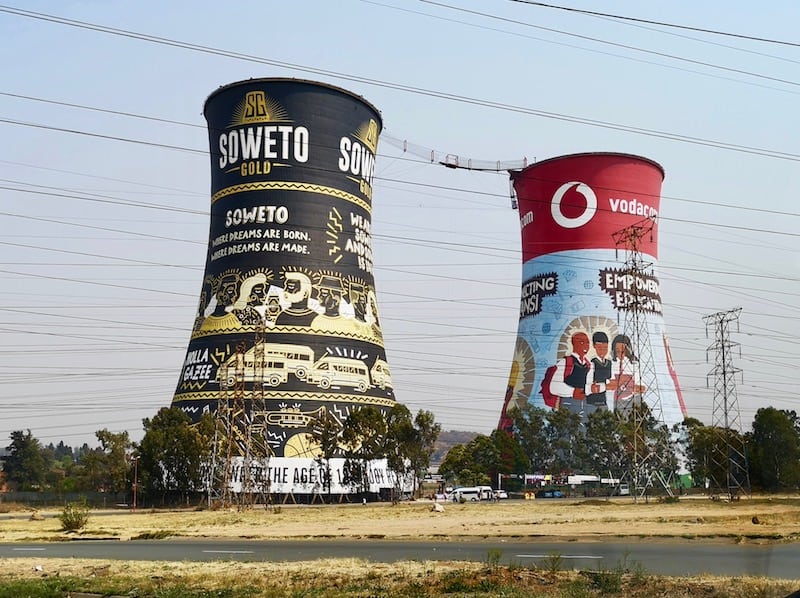 The next thing on your one day in Johannesburg’s list is driving to Soweto. The short name for South Western Townships, Soweto, was established in 1904 to residence migrant workers operating in the gold mines. As time went by, many people of color were relocated to this area as the city center was reserved for whites only. Some things changed in 1994 due to Nelson Mandela. Now the people living here have a university and a mall. Most of the houses are one story, and you will notice the red bricks almost everywhere. 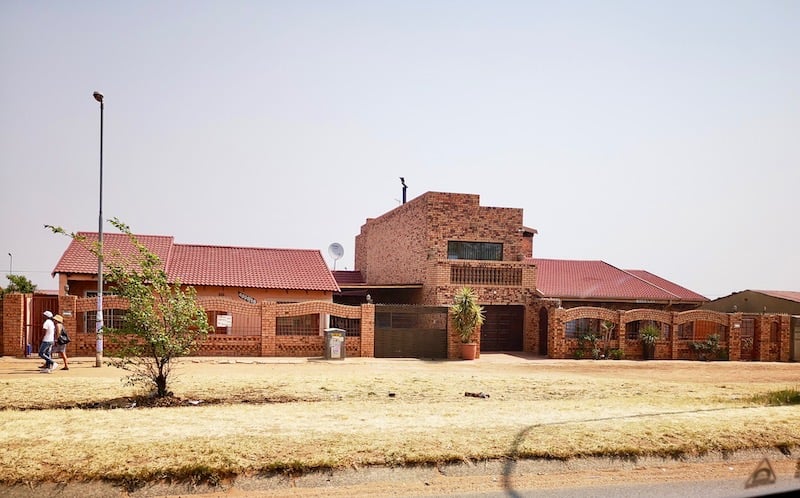 “I saw a child fall down. Under a shower of bullets, I rushed forward and went for the picture. It had been a peaceful march; the children were told to disperse, they started singing Nkosi Sikelele. The police were ordered to shoot.” – the statement of Sam Nzima, talking about the events that took place on June 16, 1976, in Soweto.

The memorial and museum are a national heritage site, named after Hector Pieterson, a young boy killed during a march through Soweto when students protested against Apartheid. You’ll walk along a series of photos taken on June 16, 1976, so you’ll get to learn more about the facts, but I must say, the experience is affecting.

Photo: Mbuyisa Makhubo picked up Hector Pieterson and, together with Hector’s sister, Antoinette, ran towards the only photographer in the area. 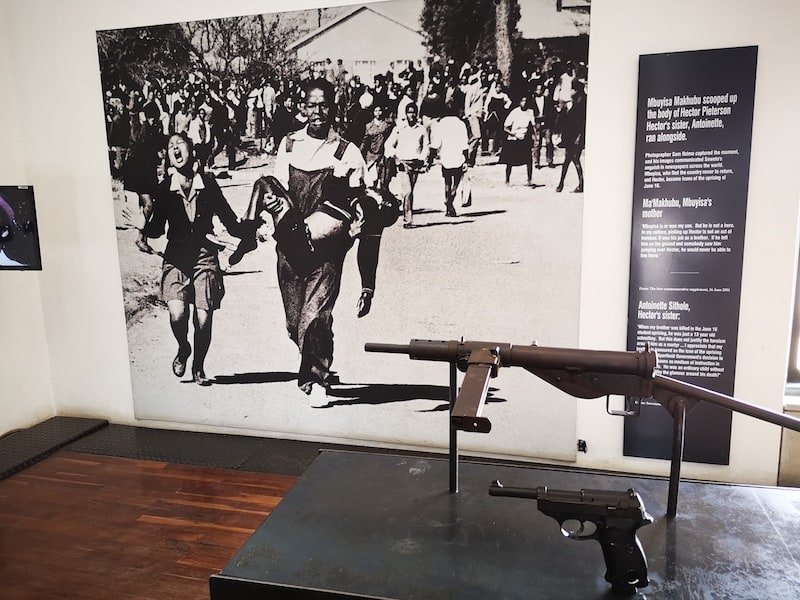 Just across the Hector Pieterson Memorial & Museum is a souvenir alley. The vendors are friendly and lovely, not too demanding, so if you are looking for some souvenirs to take back home, there is plenty to choose from. You will find souvenirs on Vilakazi Street, but the area is too crowded with too many vendors, so they tend to be quite aggressive. 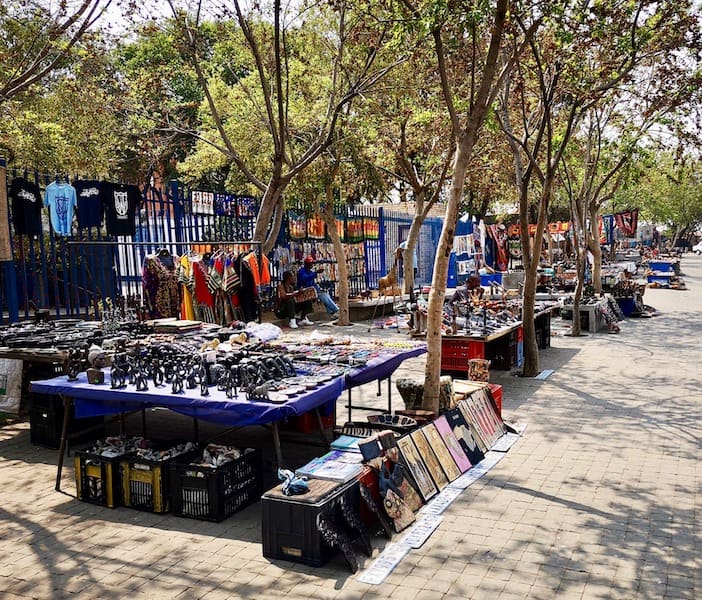 To reach the Mandela House, you have to park on Vilakazi Street or around this area.

As we were trying to find a parking place, we bumped into numerous men seeking to stop our car by standing in front of the vehicle. They told us to park at a specific location so they could protect the car during our visit. At some point, the police arrived, and suddenly everyone disappeared. I have to be honest; the street came as a big disappointment to us as we felt like being hunted.

Just don’t get scared, be vigilant, and let them be. In case you get hungry, you will find numerous restaurants in the area, or you can stop for a cold drink. Before you visit Nelson Mandela House, take a quick look at Desdemond Tutu House.

At number 8115 on Vilakazi Street, you will find the small red brick house where Nelson Mandela lived before his arrest: a lovely authentic home, with many objects and information on display. The visit takes no more than 10 to 15 minutes, and you get a glimpse of how the Mandela family used to live. Unfortunately, this area also tends to be crowded as they let too many people go inside. But I still feel Nelson Mandela House is one of the places you need to visit while in Johannesburg. 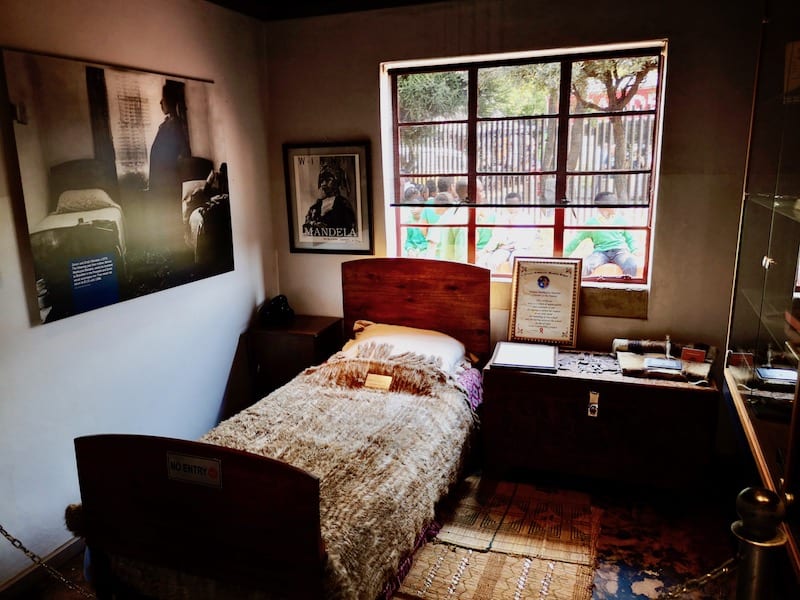 The last stop of the day is Constitution Hill. The site is a former jail and military fort that imprisoned many known men and women fighting for freedom like Nelson Mandela, Mahatma Gandhi, Fatima Meer, or Winnie Madikizela-Mandela. During its 100-year history, the site incarcerated men, women, and children of all ages and races. On a guided tour, you’ll get to understand and learn more about the place.

In 1994, when South Africa transited to democracy, the site became the country’s Constitutional Court. Entry to the Court is free; still, entrance fees are charged for the museums.

Note. You can leave your car in the secure underground parking, found on levels C and D coming from Joubert Street, for only a few rands. 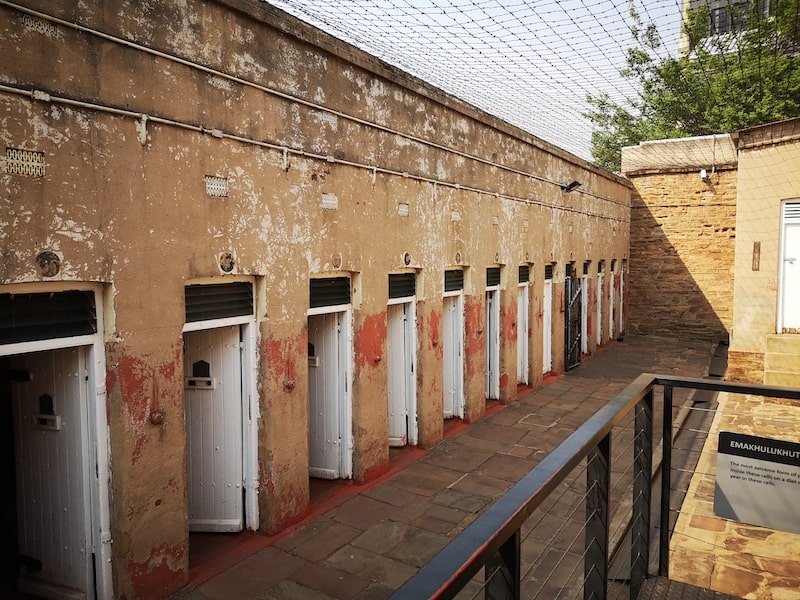 Finish the Day with a Delicious Dinner

Depending on where you are staying, pamper yourself with a proper dinner at a restaurant near your hotel! We drove almost 75km in only one day and ended our journey at Nelson Mandela Square, as we stayed in the Sandton area. We’ve seen beautiful places and experienced contradictory feelings! The impact of what we saw was and still is enormous!

Although we are not big fans of restaurant chains, we bumped into the Ocean Basket Restaurant at Sandton Mall. We only ate fresh fish and seafood for the last two weeks, and since we were flying home, back to Europe, we decided to end this epic journey with a seafood plate. Not a clever idea, you would say, since Johannesburg is so far away from the ocean. But we had a pleasant surprise, as the dish was so delicious! 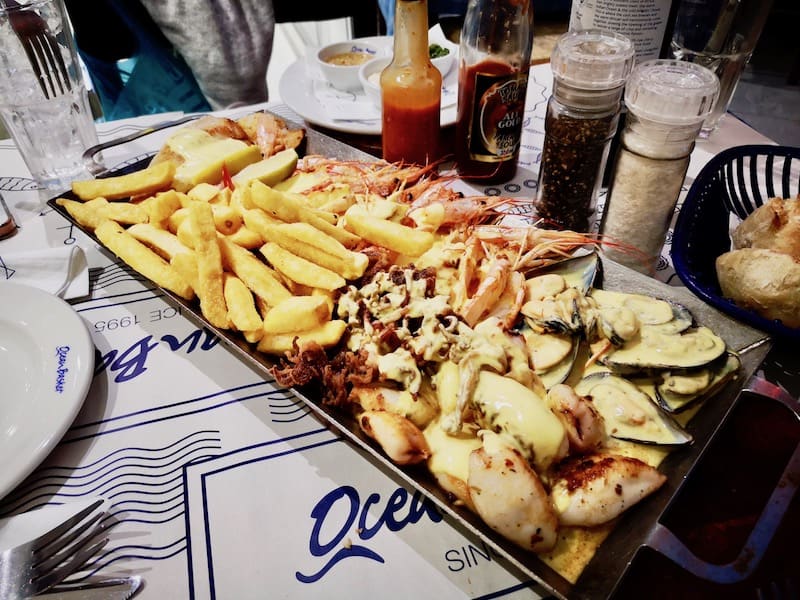 Interactive Map & Our One Day In Johannesburg

We drove almost 75km on our day in Johannesburg, from the Sandton area, down south to Apartheid Museum, the Soweto area, and Constitution Hill, then back to Sandton. If you stay in Rosebank, the distance will be shorter.

Are you on Pinterest? Pin this image and Save it for Later! 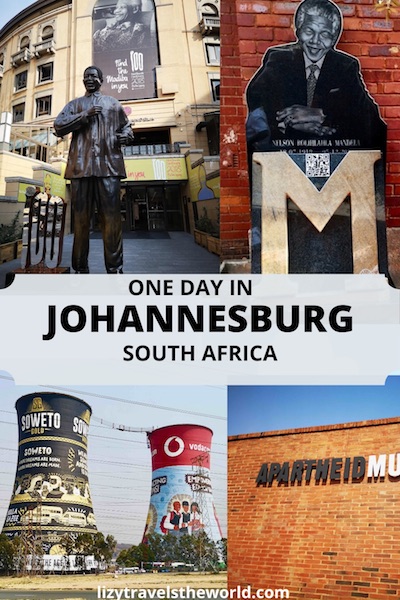