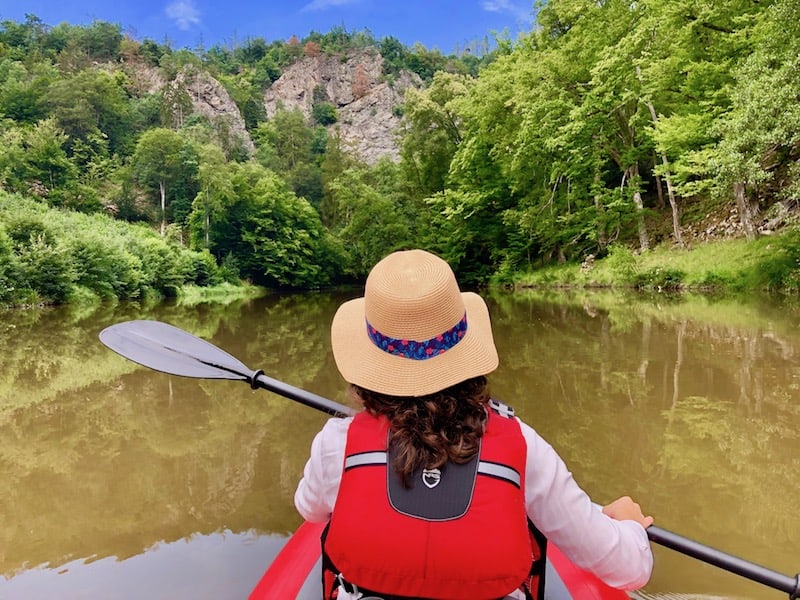 Thaya and March/Morava rivers are the only lowland rivers in Austria with various floodplain landscapes and beautiful loops, providing the perfect wildlife habitat. We’ve paddled the stretch from Breclav (CZ) to Hohenau an der March (AT) and fell in love with the Thaya river, so we wanted to complete this section too. Paddling the Thaya through beautiful landscape and Castle Ruins turned out to be the best scenic getaway.

Thaya has two source rivers that merge at Raabs/Thaya. The source river, named German Thaya, originates near the village of Schweiggers in Upper Waldviertel, Austria. In contrast, the Moravian Thaya, the second large source river, flows from the Czech Republic to Austria.

Near Reinthal, Thaya returns to Austria, forming the border between Austria and the Czech Republic for almost 20km.

Finally, after its long winding course, it flows into March/Morava River, near Hohenau an der March, where Austria borders the Czech Republic and Slovakia at the same time.

Things to Know Before Paddling the Thaya

#2. Always check and double-check the water level of the river here.

#3. There are four Weirs and a tiny island to avoid on this route.

#4. The exit and entry points can be muddy, and the path connecting them is full of vegetation.

#6. Paddling the Thaya is ideal for beginners, families, and nature lovers.

#7. Wear a sun hat, glasses, and long sleeves since the sun can burn during midday hours.

#8. There are many mosquitos from time to time, so bring insect repellent for the body and clothes. 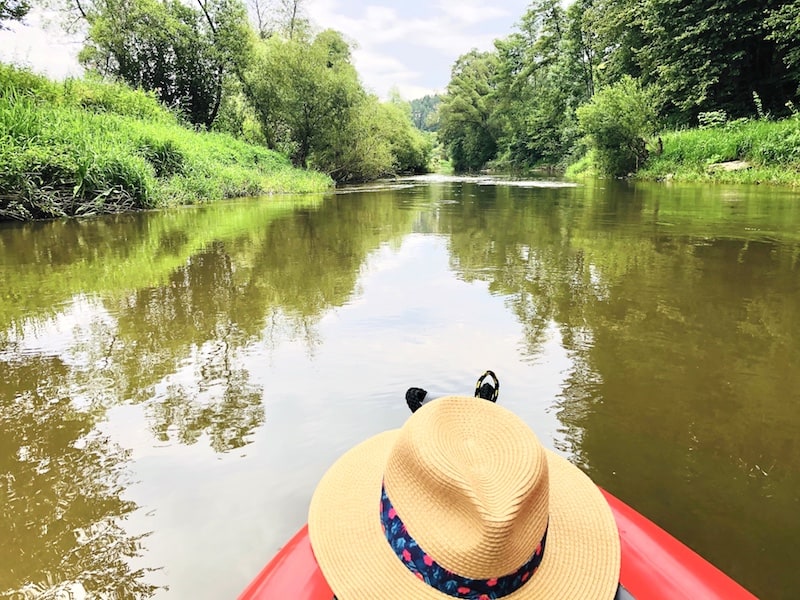 On a beautiful Saturday morning, we drove towards the north part of Austria to paddle the most beautiful navigable section of the Thaya. We had some concerns as the water level was low early that morning, measuring only 123cm. As we had some road in front of us, we were afraid that the water level would decrease even more by the time we got there, and we won’t be able to paddle the river that day. Luckily by 10 am, the river measured 125cm, and paddling the Thaya river seemed possible.

First thing, we left our bikes at a restaurant in Eibenstein. We asked the family in charge to allow us to leave the bikes in their courtyard for a few hours, and they were kind enough to let us. We planned to serve lunch later at their restaurant; unfortunately, the place was booked for a private party.

Note. You can leave the bike near the river, at the bridge in Eibenstein, without asking anyone’s permission to store your bike for the day. 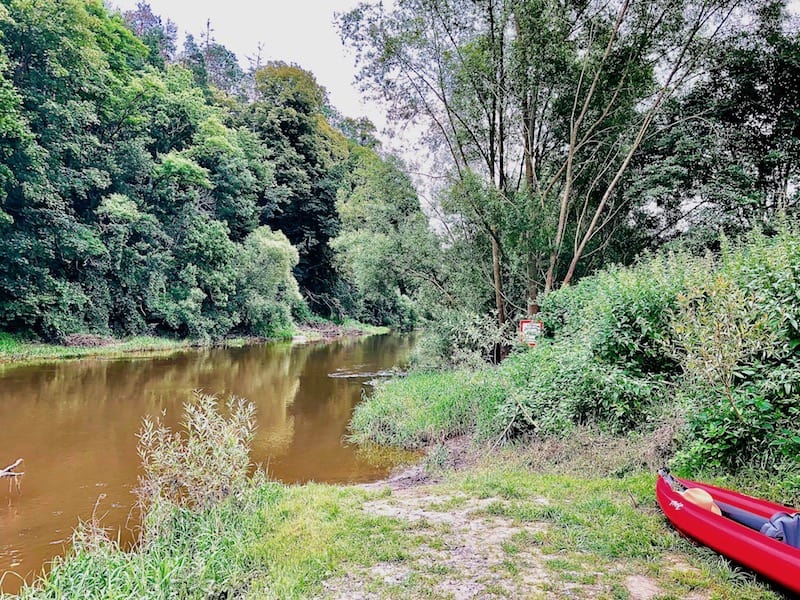 The smooth but muddy entrance into the water near the JUFA Hotel and parking lot.

Shortly before 10 am, we parked the car near the JUFA hotel in Raabs an der Thaya, near the riverbank, and began to inflate our Kayak. We were not the only ones there, another couple came and left soon after us on an inflatable kayak, but we never saw them again that day. Mosquitos were flying around us, so we left the shore as quickly as possible.

The water entrance was smooth, and the lack of current made the first part of the trip enjoyable. We soon paddled into a romantic wild area, with high rocks on the river’s right side and dense flora.

KM 6 – The first Weir in Kollmitzgraben

The first 6 km were picturesque, in total stillness; only a few raindrops smashed the area’s silence. We shaded under some trees during the mist, so we didn’t feel any discomfort. The water displayed a cafe au lait color, and the dragonflies flew around us while we were waiting for the rain to stop.

We even met a few tourists in some blue rented canoes coming from the opposite way; they didn’t seem disturbed by the mist eighter. But, as we weren’t in a hurry, we just wanted to indulge in this beautiful landscape, so we paddled at a low speed. 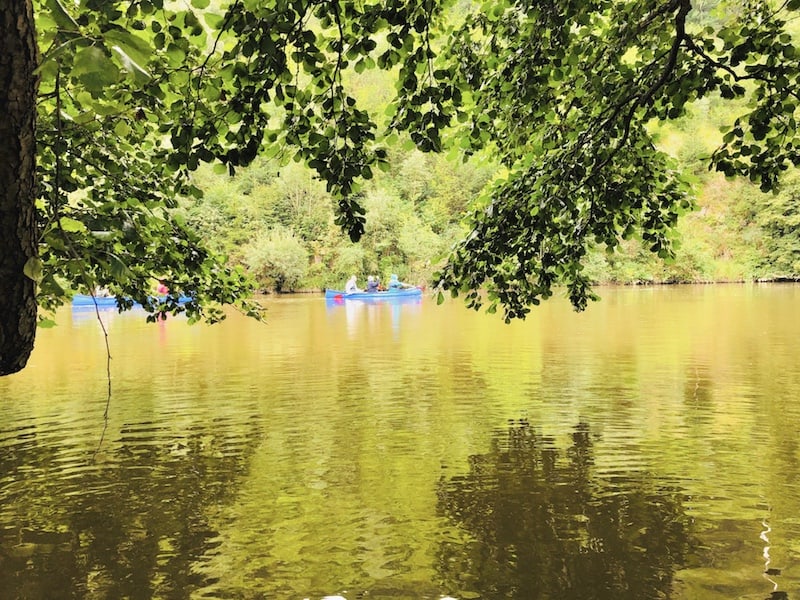 Sitting still under the trees and waiting for the rain to stop while the canoe group paddled upstream the river.

Soon, we reached Kollmitzgraben, where we landed our Kayak on the left-hand side shore, at the designated area. 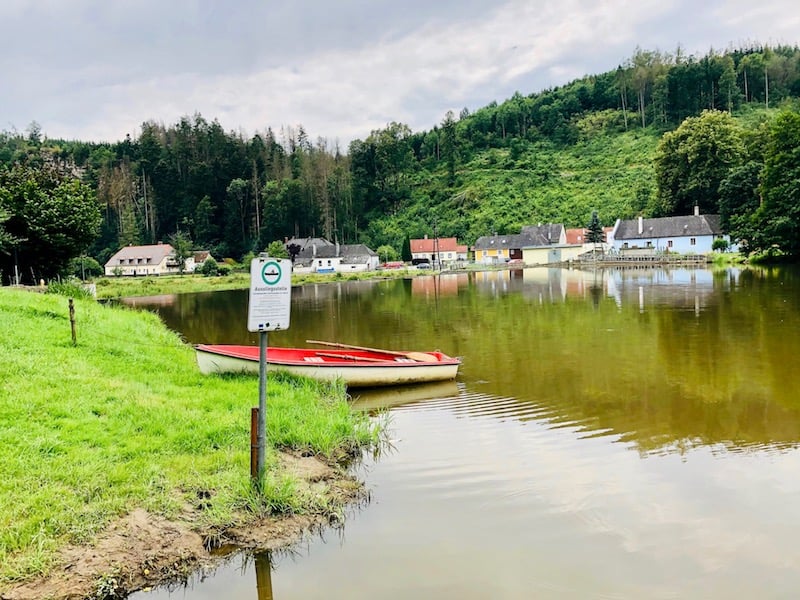 When we reached the first Weir in Kollmitzgraben, the sky was clear, and the temperatures were pleasant, so we decided to visit the famous Kollmitz Castle ruins. We fixed the Kayak on the beach trolley, and we headed uphill to the ruins, where we dropped it near the parking lot. 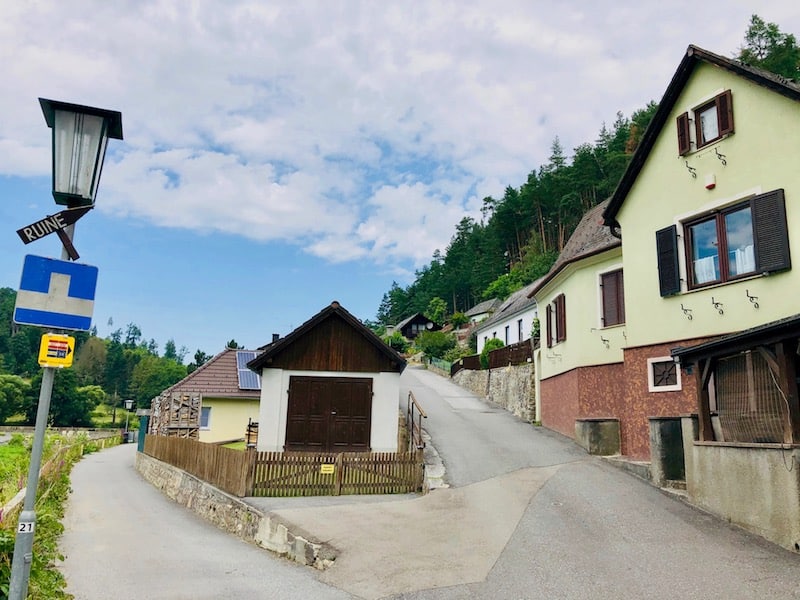 If you also wish to visit the ruins, you will reach a sign on your way to the entry point so you will know exactly where to go.

The ruins of the Kollmitz Castle are some of the largest in entire Austria. The Castle was a defensive border against the Bohemians once. Now, everyone can roam freely inside the Castle ruins, pay a visit to the small museum, climb the steep steps to the towers, find the old made and her husband, dream of how life used to be in the early days. 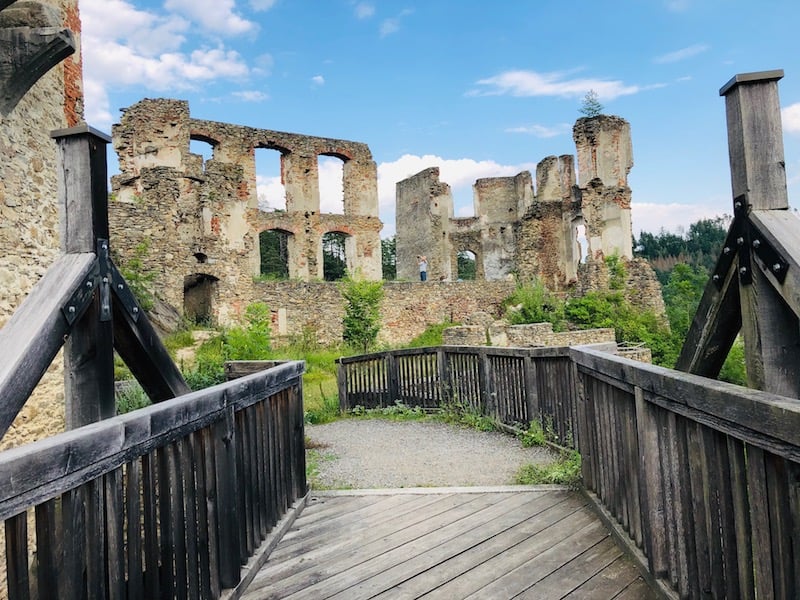 Our greatest wish was to savor the beautiful views of the Thaya Valley from one of the towers. After the visit, we grabbed a quick bite and a coffee at the snack bar inside the ruins and left on our adventure: paddling the Thaya River! 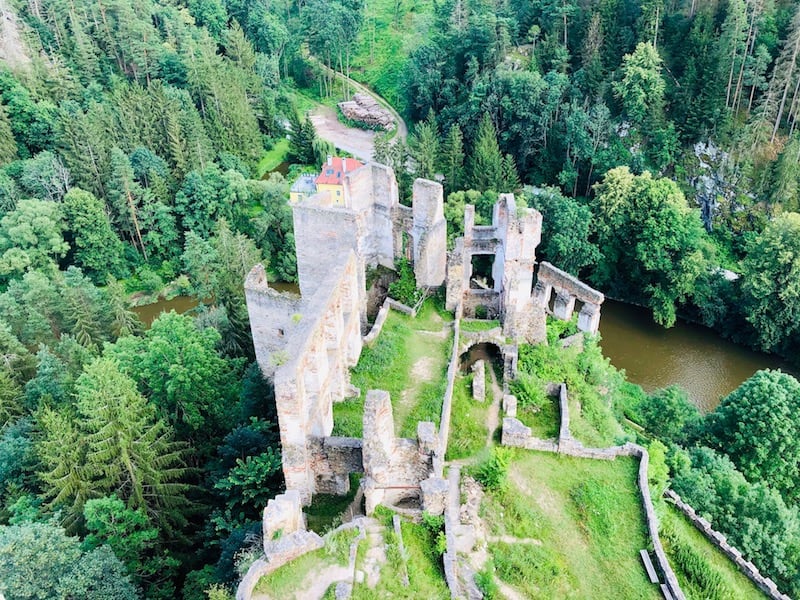 Free of charge, but you can always donate something for the preservation of the ruins.

KM 8 – The second Weir in Dorfwiesgraben

After our short break, we headed to the band river in Kollmitzgraben. The embarkment was unstable and way too muddy for our taste, so we had to be cautious not to bring soil inside the Kayak. We took a few more photos of the ruins from the water, and we paddled further. 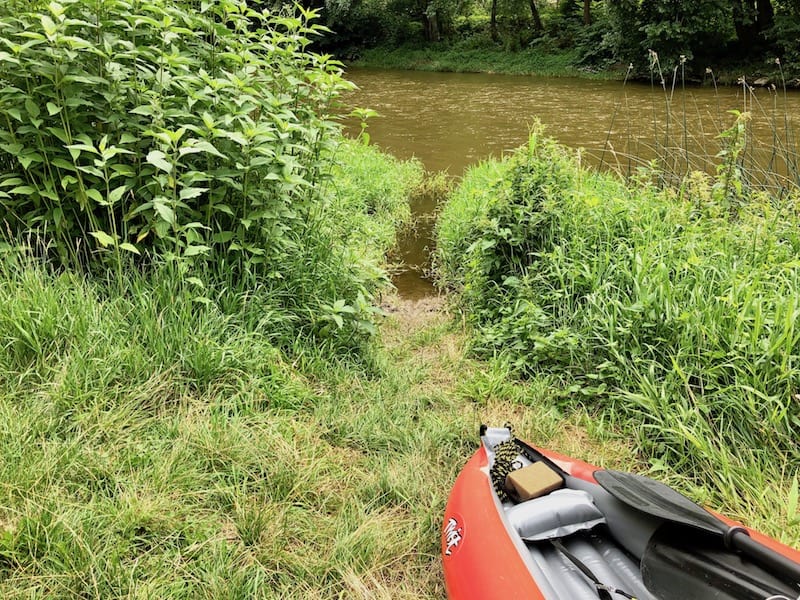 For the first time in a very long time, we recognized a beautiful black stork flying around us. Fishes were continually jumping out of the water while a bunny came out of the bushes, greeting us with his long ears.

We landed the Kayak on the left-hand side of the river, just before the Weir in Dorfwiesgraben. To reach the river band after the Weir, we had to march on a path full of vegetation, challenging to do with a kayak. The embankment was steep and muddy once again. 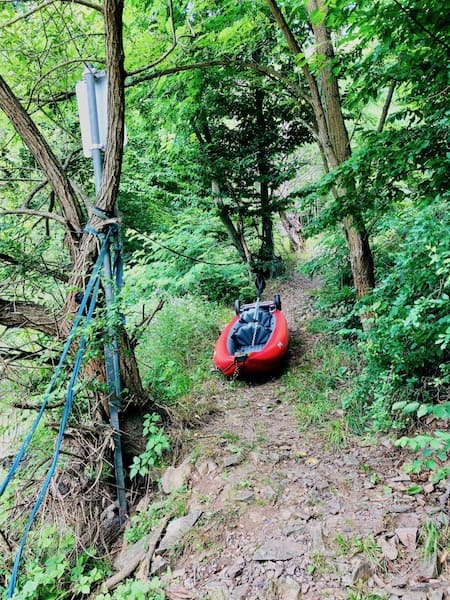 KM 8.5 – No need to land the Kayak, just paddle further

Shortly after the departure, no more than 500metres away, we reached another exit point sign on the right-hand shore. We stopped, landed the Kayak, and looked for the entry point. Unfortunately, there was no sign, and the path was obstructed after only a few meters. Back to the Kayak and back on the water. It seemed like there was nothing dangerous; only the river’s current was slightly stronger than before. 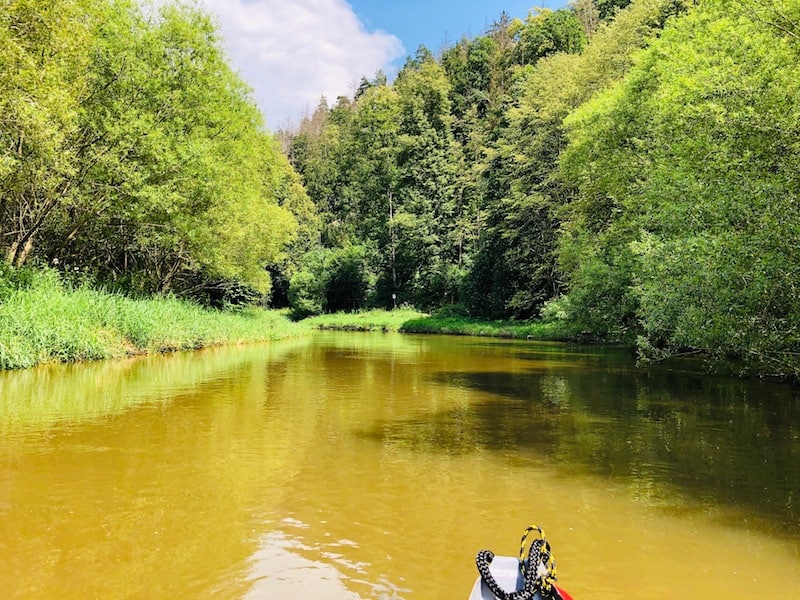 KM 10.6 – The third Weir in Brunngrabenbach

We continued to paddle further, admiring the beautiful landscape and listening to the sound of nature. Nothing can be more recreative than that. Finally, we reached the third Weir, not far from our last stop.

We held at the exit point on the left-hand shore, but the path led nowhere. So then, we took the Kayak and paddled closer to the Weir, trying to find a proper place to embark. Not a chance! We had to grab the Kayak up and cross an area full of nettles. Oh, boy, they sting! Sweaty and annoyed by the lack of a proper entry point, we finally found a place to put the Kayak and left the unfriendly area behind. 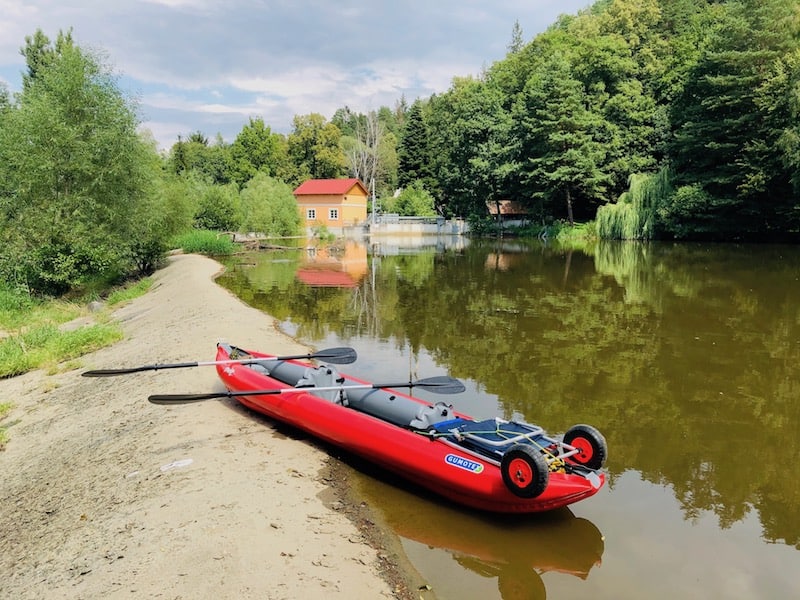 A few minutes later, we bumped into a small island, with the river flowing on the right and left sides. We stopped here and tried to look right or left, but we couldn’t see much. The river seemed a little bit agitated, and as we couldn’t see what was going on, we decided to cross over the small island band. I presume we could have paddled on each side of the river, having no problems. 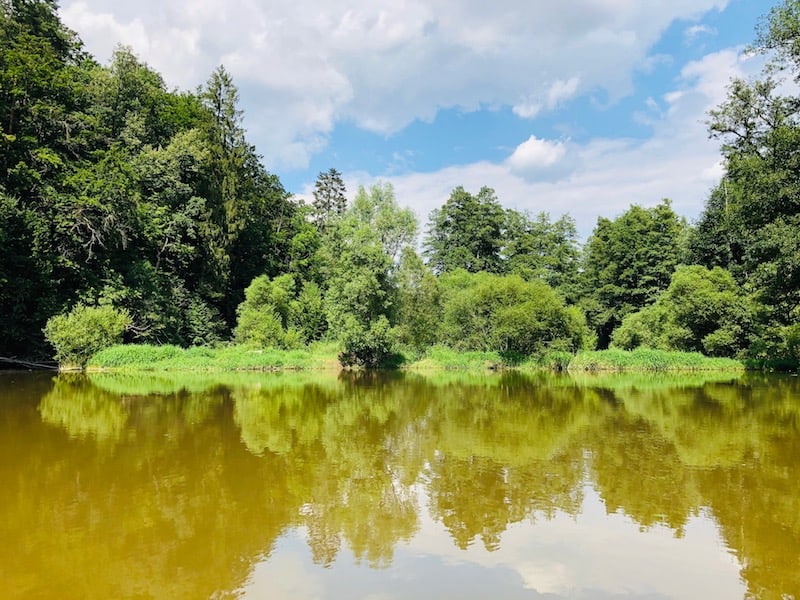 KM 13 – The fourth Weir before Eibenstein

After crossing the small island, the flow was slow once again, the vegetation dense and the views amazing. A few herons flew around us, and another bunny came out of the bushes.

Soon after, we reached the last Weir, just before Eibenstein. We landed on the left side at the exit sign and headed directly to the entry point, which was a little bit hard to spot. Three youngs were paddling the river upstream in a canoe and looking for the entry point. 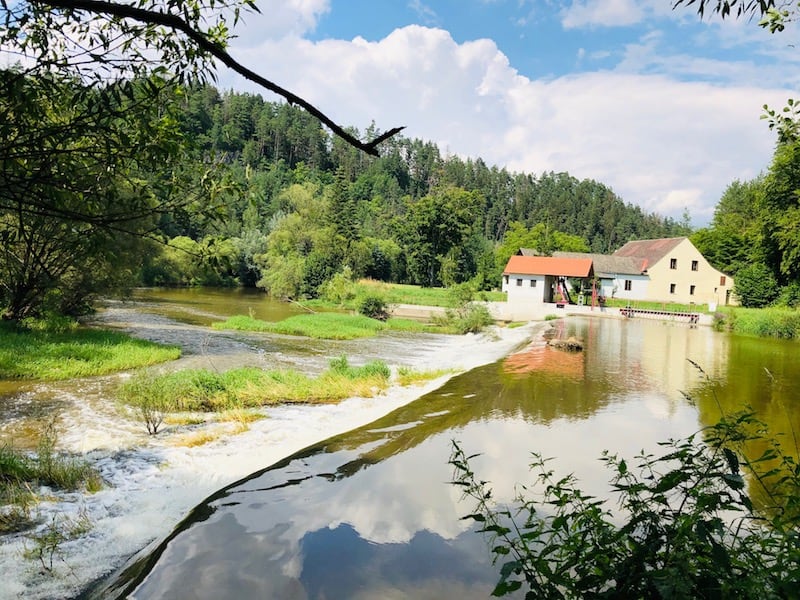 Only one kilometer to paddle, and the beautiful day was coming to an end. We stopped at the bridge on the left-hand shore. Finally, the exit was easy to do, no more mud, just a few rocks. We took the Kayak out of the water, placed it on the grass, and packed everything after taking a short break on one of the benches.

Note: Paddling the Thaya from Eibenstein further to Drosendorf is forbidden! 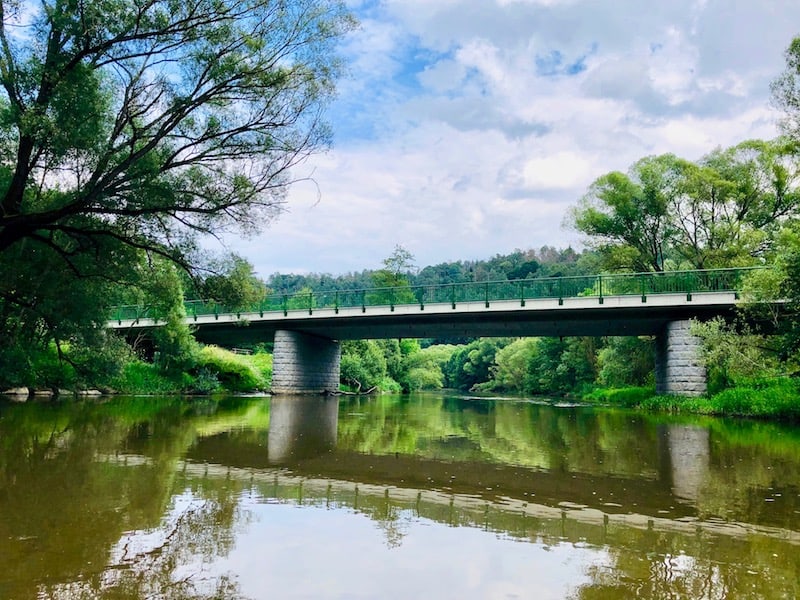 We collected our bikes from the restaurant and biked 6.5km to Raabs an der Thaya, where we left our car. The ride back was pleasant as the temperatures were dropping, and the traffic was low at that time.

Alternative: Paddling the Thaya from Breclav(CZ) to Hohenau an der March(AT)

Paddling the Thaya is also possible to further east when the Thaya returns to Austria, to the white storks and herons paradise. The current is more substantial, making the paddling easier, and the route is ideal for beginners and families.

There is no Weir to obstruct the route, no water level to beware of, the landscape is different, and you will get the chance to paddle through many fishing cabins along the way and spot many white storks.

If you want to find out more about this route, read the entire article: 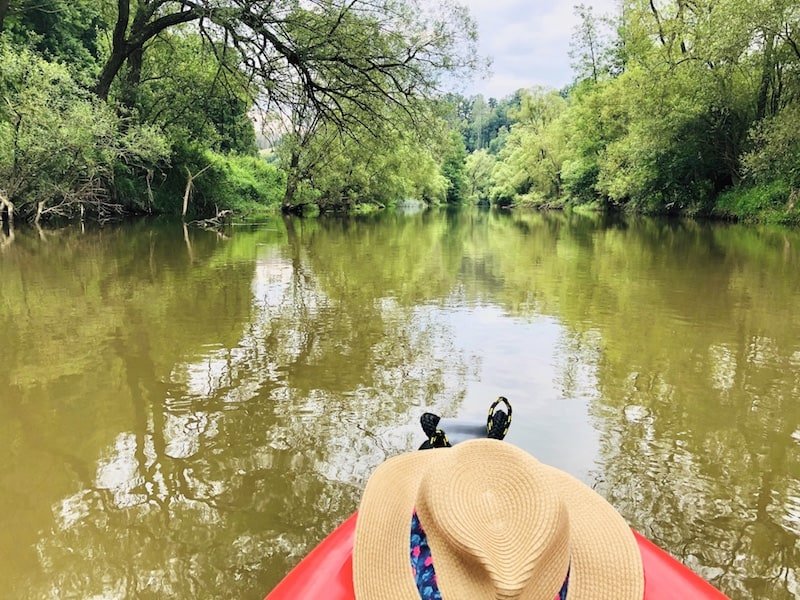 Paddling the Thaya from Raabs to Eibenstein, Austria. Interactive Map

Underneath, you’ll find a customized map that includes all the locations mentioned in this article. Just open up this article on your phone and click on the frame in the upper right corner of this map. Google Maps app will open up and you can check all the details. I hope it helps!

KAYAKING THE DANUBE CANAL IN VIENNA

Are You on Pinterest? Pin this Image and Save it for Later! 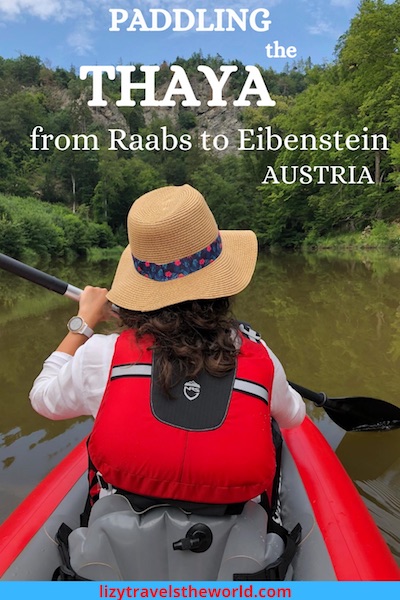