Things To Do In VARANASI, India

Although there aren’t many things to do in Varanasi, a trip to this place should be on everyone’s list traveling to India. Ever since we told our friends that we would visit India, they advised us to start with Varanasi: cause it’s going to be dirty, noisy, crowded, dirty once again and it will shock us. To our surprise, it was the place we loved the most, and we will definitely return here someday!

Book a Hotel on the Banks of the Ganges River

The area between Assi Ghat and Manikarnika Ghat, on the Ganga River banks, is more like a promenade, with immense steps going into the Holly River. No tuk-tuks or autos are allowed, so the lack of horns is a big blessing. Here you will find the tranquillity and the serenity in Varanasi, along with some lovely views over the Ganga River. Booked in advance, you can find some good deals.

Thali is a meal served on a tray with rice, chapati or naan, prickles, and six little dishes with different flavors: spicy, sweet, bitter, sour, astringent, and salty. Every hotel in Varanasi and India comes with a restaurant where the food is simply delicious, so finding a proper place for lunch or dinner should not be a problem.

Walk along the Ghats

Varanasi has more than 88 Ghats along the Ganga River, and a walk along the Ghats is a fascinating experience.

Start your day with a coffee at one of the cafes near Assi Ghat, and enjoy the morning aartis. This area is quiet, has fewer tourists or locals. The boatsmen are hard to find here so that you won’t feel harassed all the time. If someone approaches you and you don’t want to go on a boat ride, say you’ve already done it, and they will leave you alone. But, if you crave a boat ride, you will meet many boatsmen on your way to Dashashwamedh Ghat, and you’ll have the chance to negotiate for one.

Walk north, along the river, to Dashashwamedh Ghat. Take your time to discover the beauty of this area: take photos, watch the cows bathing in the Ganga river, admire the Hindu holy men and people in general. Some of them are painting, selling crafts, and meditating; some will bathe or wash their clothes in the Ganga River. Still, everything seems so natural here.

In Varanasi, there are two places where the deaths are burned. The first one, coming from Assi Ghat, will be the smaller Harishchandra Ghat: one-third of the total number of cremations is held here. Locals won’t harass you, so you can take your time to see and understand the rituals better. We even saw tourists taking photos, and nobody seemed to be bothered. It is up to you if you choose so. We didn’t do it as a sign of respect.

You will see some beautiful hotels along the promenade, one of them being the famous Birjama Palace, so if you want to rest, head to the roof terrace and serve lunch with a view. As an alternative to the high prices, you can easily find other roof terraces with views over the city or the Ganges River or try some local street food. It is up to you once again.

Next, you will reach the most important place on the promenade, Dashashwamedh Ghat. It comes to life every evening when the Aarti Ceremony takes place. The walk from Assi Ghat takes more than an hour, depending on how often you stop. Beware of locals who will give you a “free guided tour” of the area but asking for a donation.

Ten minutes later, you will reach Manikarnika Ghat. Hindus believe that being burned at Manikarnika privileges freedom from the cycle of births. Two-thirds of the total number of cremations are held here. We were intrigued by the number of funeral processions and the eternal flames with ongoing cremations. The process has an attraction as the families wait for their turn in the fire. The best viewing and least intrusive is from the boat trip, though.

Take a Boat Ride on the Ganges River

If you don’t want to take a boat ride at all, or you want to do this later, tell the boatmen who will eventually approach you that you’ve already done it. But in case you wish to do it, negotiate a fair price with them. And always ask how long the tour takes, how far he will take you, and most importantly, if it’s going to be a motorboat or a paddle one.
We went for a one-hour motorboat return trip, from south to north, from Assi Ghat until Manikarnika Ghat, and we’ve paid 800rupee per boat. If we could negotiate better? Maybe. Keep in mind; it is a developing country, so 800 rupees can be a lot of money for those people.

Aarti Ceremony is a must for every tourist in Varanasi. It takes place every night at 6 pm at the main Ghat and lasts for about 40 minutes, so you should come early and decide where to sit and enjoy the holly ritual. Many people stand along with the ghat steps, while others hop on the boats to see the ceremony from the water – we did it both ways. It is an authentic performance, and it is worth seeing at least once during your visit.

Walkthrough the Old Streets of Varanasi

Stroll around the city’s labyrinthine streets, take lots of photos & feel the city’s craziness! Don’t worry about getting lost since sooner or later, you will end up in front of the Ganga river, and you’ll recognize the way back.

Are you on Pinterest? Pin this image and Save it for Later! 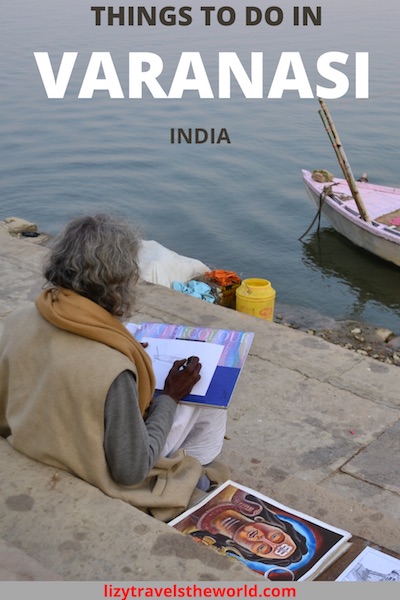 THINGS TO DO IN JAISALMER

11 THINGS TO DO IN JODHPUR