Cape Agulhas, where two oceans meet, is not on most travel groups’ itineraries, but it’s definitely a place you should visit once in a lifetime. Peaceful and tranquil, away from the busy Cape Town, spending one day in Cape Agulhas is one of the best things to do in South Africa!

Despite what many think, Cape Agulhas is the southernmost tip of Africa, not Cape Point. While there isn’t much to do and see, a day is enough to glimpse the lovely town and tick off the tip of the African continent.

We had a rental car in South Africa and I can’t recommend it enough! But if you don’t feel like driving, you can join a great day tour from Cape Town. Find out more details HERE.

Disclosure. *This post contains a few affiliate links, which means I may receive a small commission, at no cost to you, if you make a purchase through my link.*

No Time to Read Now? Pin IT for Later 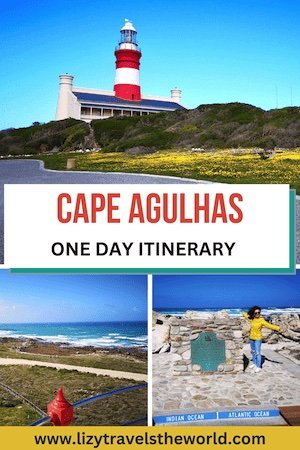 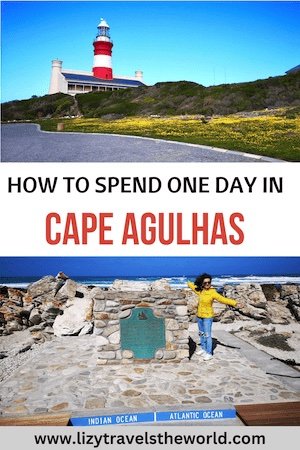 One Day in Cape Agulhas.Things to Know Before Your Visit

Is Cape Agulhas worth visiting?

Even though I mentioned in my previous post that this lovely town makes a great day trip from Cape Town, I would suggest spending at least one day in Cape Agulhas. It will give you a better idea of the place, and you can unwind after visiting the bustling Cape Town.

Are you looking for the best day trips from Cape Town? Check my article here:

Start your day with a delicious breakfast, climb the narrow stairs to the top of the Lighthouse, stand on the tip of Africa, go for a hike, and enjoy an insane sunset before heading to one of the coziest restaurants.

Soon you will realize that the feeling of being at the tip of Africa is second to none!

How to get to Cape Agulhas 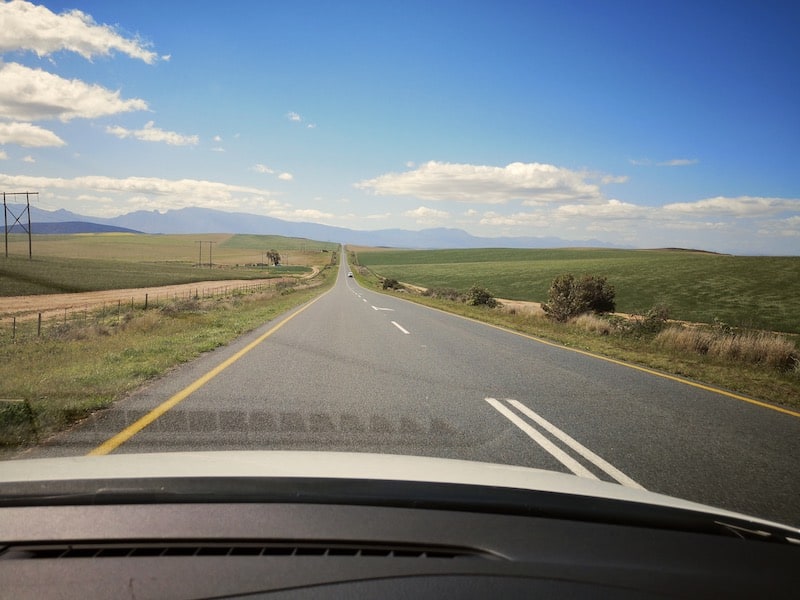 Cape Agulhas is 220 kilometers from Cape Town, a 3 hours drive. We left the beautiful Cape Town and made our way to Cape Agulhas before joining the famous Garden Route. We weren’t in a rush, so the drive took more than 4 hours as we decided to stop along the way and enjoy the scenic views.

On the way to Agulhas, we chose to take another famous route, the Clarence Drive, which makes its way along the rough South Africa shoreline. After a coffee break, we stopped in Hermanus for whale watching from the shore(check out the best watching spots from the coast HERE). The road took us past the Struisbaai, where we enjoyed a lovely walk on the longest white beach in the southern hemisphere.

Later in the afternoon, we reached the remote Cape Agulhas, where we enjoyed a quiet evening with a glass of wine in front of a chimney.

Cape Agulhas is a year-round destination, but on average, the warmest months are January to March and December, with the coldest and rainiest being June to August. The average maximum temperature is 20 degrees.

The best times to visit are from March to May and September to November, when the climate is beautiful, and temperatures rise.

Where to stay in Cape Agulhas 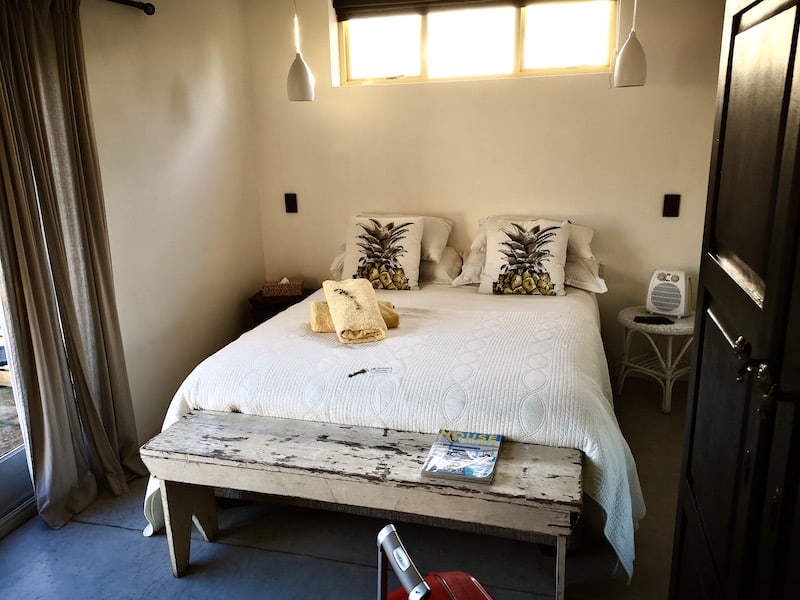 Agulhas Rest Camp is 10 kilometers away from Cape Agulhas lighthouse. The lovely chalets look out onto the ocean and the fynbos and you can always enjoy a braai here. Wood is provided from the main office.

We chose to stay at a lovely cottage, booked through Airbnb and it was such a find! We had our own yard and could enjoy a perfect evening hearing the ocean and sipping a hot chocolate.

How to See the Best of Cape Agulhas in One Day

Start your day with a delicious breakfast at Suidpunt Potpourri 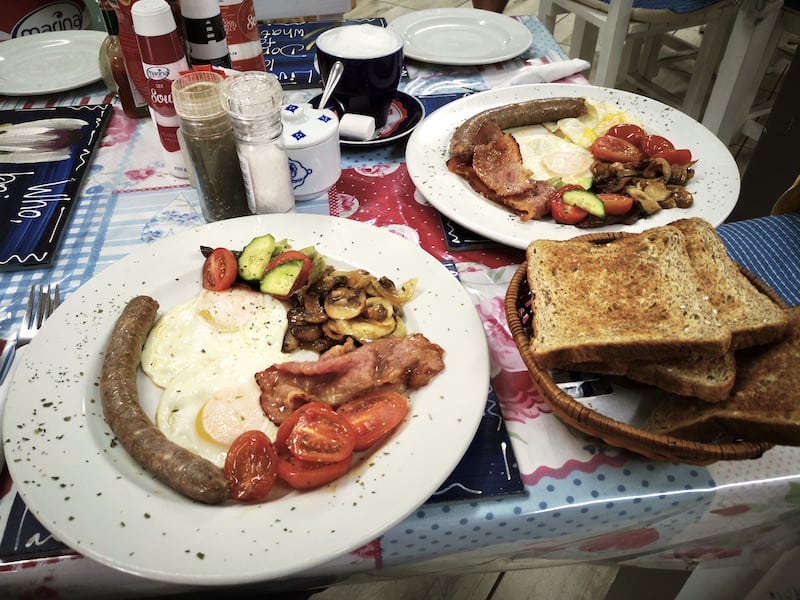 After a good night’s sleep, head to the Suidpunt Potpourri for a delicious breakfast. You will find a cozy atmosphere and a very friendly staff! The portions are enormous, and the homemade cakes and the coffee are so delicious! 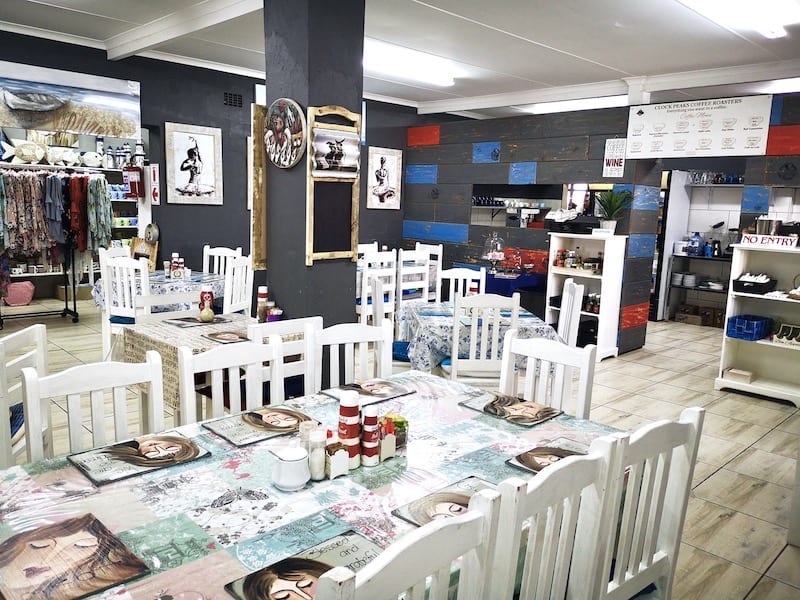 What I loved about this place is that it is tucked away inside a huge gift shop, meaning I couldn’t resist and had to splurge on some handmade souvenirs. You won’t resist eighter, but I warn you that you could spend hours searching for the perfect souvenir to bring home. 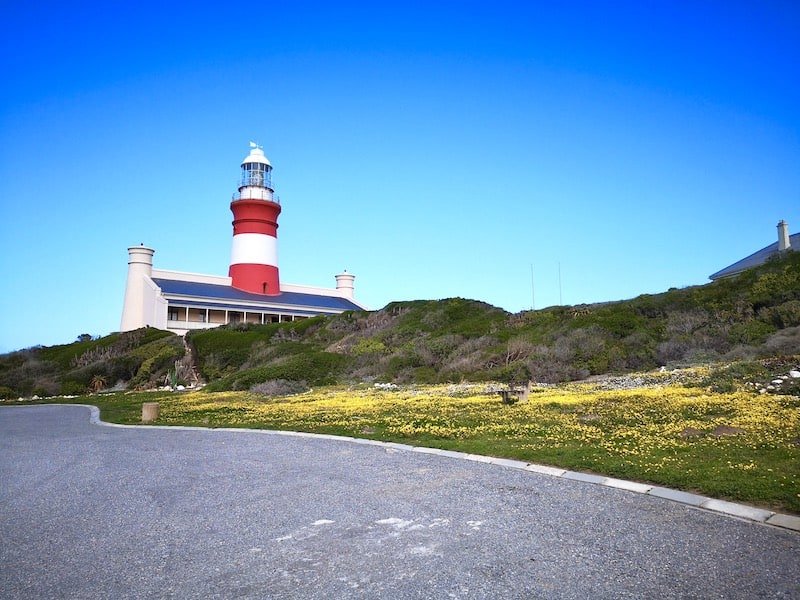 A stone’s throw away from the restaurant, you’ll notice the red and white Lighthouse, the third built in South Africa and the second oldest one still open.

It was built in 1849 from locally quarried limestone to restrain the region’s count of catastrophic shipwrecks. The design was modeled on the original Egyptian Pharos of Alexandria, one of the oldest seven wonders of the world.

For a small entrance fee, you can get inside and explore the museum on the ground level for a while. You’ll find an exciting display of some ancient fish traps used by the Khoisan people, old lanterns, and Info about lighthouses along the country’s coast. 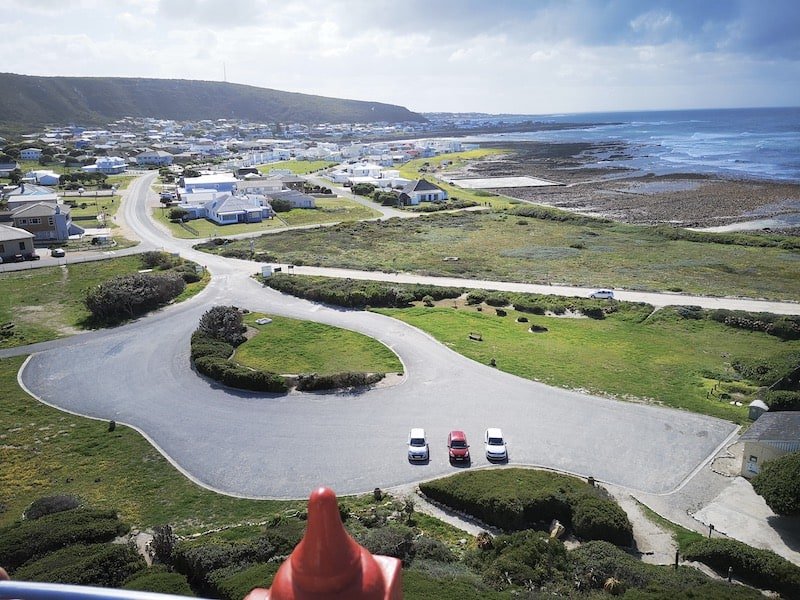 If you didn’t exaggerate with your breakfast, it’s time to explore the top of the Lighthouse, meaning you have to climb a steep ladder. There are three levels and 71 narrow steps to the top, but the view is absolutely breathtaking.

Stand on the Southernmost Tip of South Africa 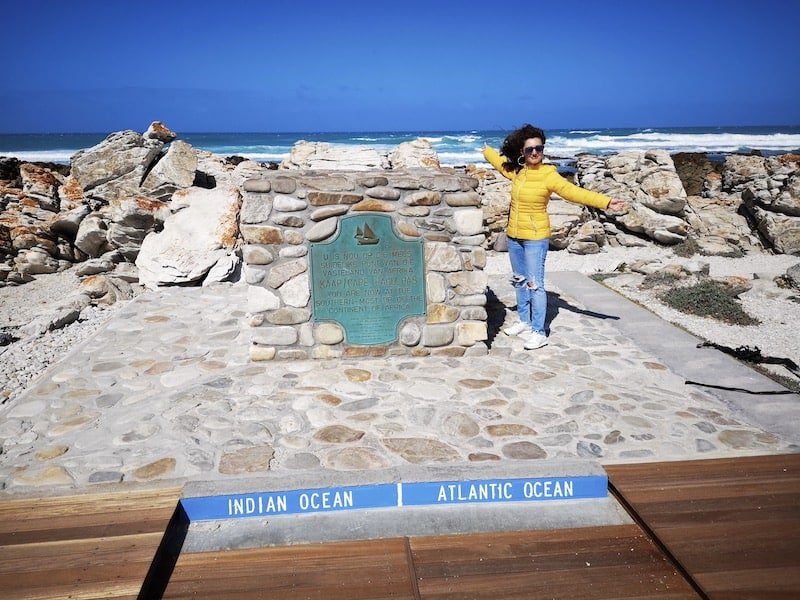 Cape Agulhas is the place where the Indian and Atlantic oceans meet and the point of convergence of the Benguela and Mozambique currents.

The white and red stripe Lighthouse stands just one kilometer from the southernmost tip of Africa.

You can walk from the Lighthouse or take the car until this point. A lovely walkway with boards along the way representing the marine life and descriptions of the local indigenous vegetation connects the Lighthouse and the monument. 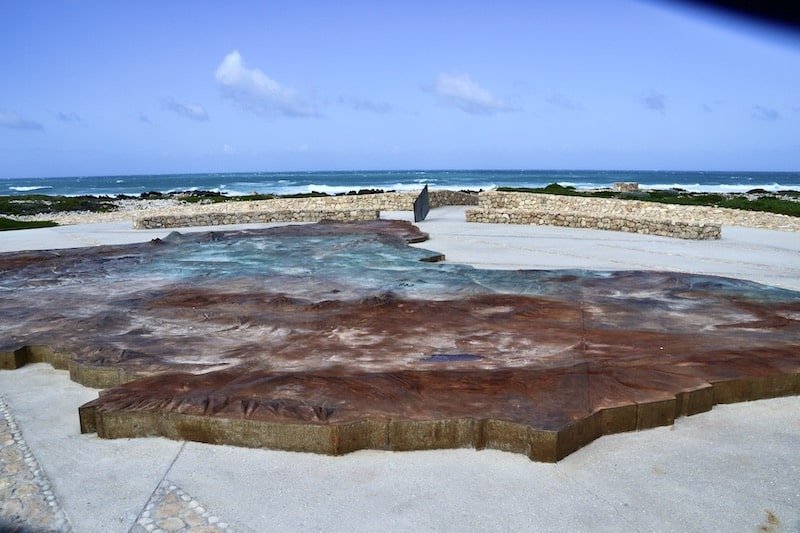 Once you arrive, you will find a giant ground-level map of Africa that pinpoints your exact location.

There’s nothing spectacular here, only a beautiful monument to mark the southernmost end of Africa, inscribed in English and Afrikaans. What makes this place unique is the lack of people and the wildness of the ocean.

Compared to Cape of Good Hope, where taking a photo with the famous sign is a challenging task due to the considerable number of visitors, most likely, you’ll be the only one here.

Grabbing a selfie with the sign is a must, but how since there is no one around? We had the same issue, and our selfie stick couldn’t do its job due to strong currents, but after 10 minutes of effort, we made it!

If you’re looking for the perfect souvenir, take a pebble from both oceans to bring home!

Visit the Graveyard of Ships

The Agulhas bank has a unique geographical formation. It’s also known as the Cape of Needles because compass needles show no variation between magnetic north and real north due to the sharp rock formations. Because of that, there are several shipwrecks in the area that you’ll want to see before the ocean claims them!

In the last century, it’s estimated that more than 200 shipwrecks have sunk off the shore of Cape Agulhas.

Johanna 1682 was the first ship to be wrecked on the South African coast. The vessel was heading from England to Bengal, accompanied by four other ships, when it got lost during a quiet night.

Nossa Senhora dos Milagros 1686 was a Portuguese ship heading to Europe carrying gifts for the kings of Portugal, England and France. Mysteriously, the vessel got lost near Cape Agulhas and lost everything.

Meisho Maru no. 38 was a Japanese fishing vessel that wrecked in 1982 during a severe strong. Fortunately, the members of the crew were able to swim to the shore and rescue themselves.

Hike through the fynbos in Cape Agulhas National Park 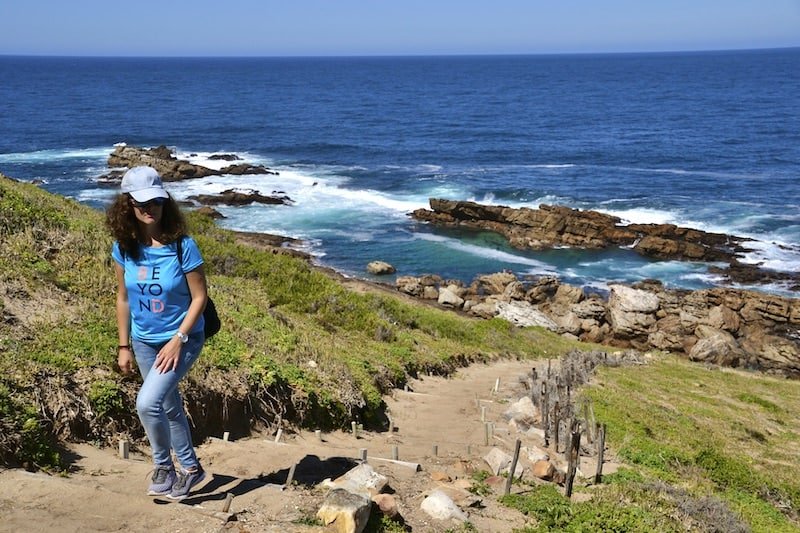 Boasting 2000 species of indigenous plants, going on a hike during your one day in Cape Agulhas is something you shouldn’t miss. You can choose several walking trails, but I would mention the two tracks inside the Cape Agulhas National Park.

The circular 10.5 kilometers Two Ocean Trail takes you to a beautiful viewpoint overlooking the Atlantic and Indian Oceans. Starting from the Agulhas Rest Camp, with just one section to climb, it’s a flat leisure trail through the indigenous fynbos. Take lots of photos as the beauty of your surroundings is something not to forget.

The circular 5.5 kilometers Rasperpunt Trail is named after the ancient Khoisan fish traps built of stone that are still visible at low tide. The route starts and ends at the Meisho Maru 38 wreck, and although it’s shorter, it’s also much more demanding.

Keep your eyes open as you might spot mammals like the otter, porcupine, or genet! And look for the whales and dolphins!

Don’t forget to use insect repellent and sunscreen! A hat will also help if the wind is not harsh.

Stroll through the town 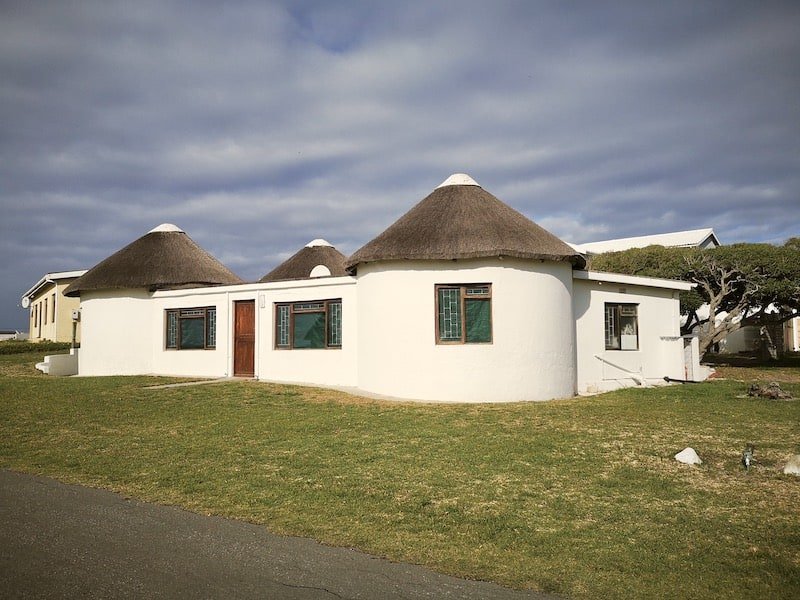 After discovering the area, we returned to our cottage, took a hot shower, and dressed for a night out. We decided to walk as it was still daylight and wanted to see the neighborhood.

We even met some residents interested in where we came from and if we enjoyed their home town properly. I found them welcoming and always happy to share their stories and advice on things to do in the area.

Spoil with a delicious dinner

In my opinion, the Zuidste Kaap Restaurant is the best option in town for lunch and dinner. We had this place booked by our host for dinner. And to our surprise, we got a lovely table in front of the fireplace where we enjoyed the most delicious meal!

The ostrich steak and the garlic snail dishes were excellent! So tasty and tender, such a fantastic treat! One of the best meals in South Africa had to be at the southernmost point of Africa! 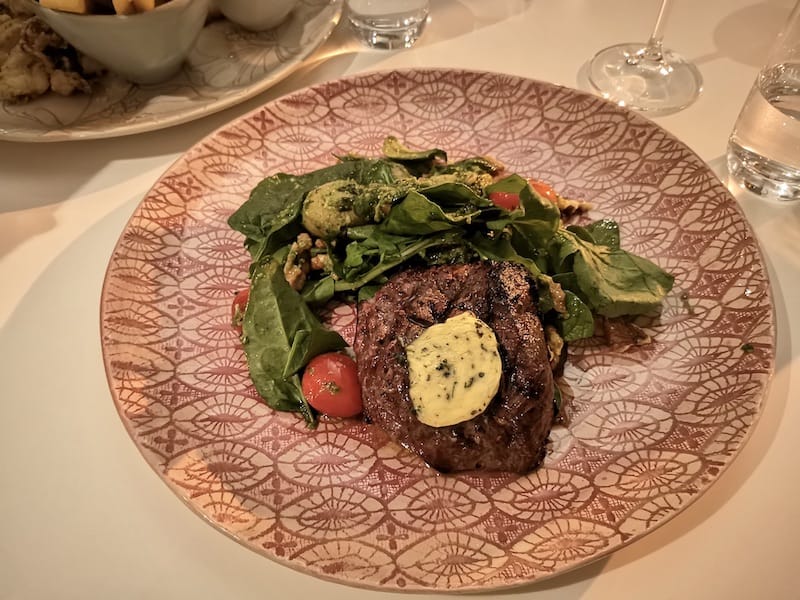 Ostrich Steak – such a fantastic dish!

For the best hospitality in town, you have to try Agulhas Seafood Restaurant. The place is a favorite among locals and tourists alike. The quality of the food is excellent and the seafood couldn’t be fresher!

Go for Hake & Calamari and chips combo, for Cape salmon on the grill or a seafood plate! Also, the homemade sushi is mouth-watering. Eighter way, you’ll be more than satisfied with your choice.

Agulhas Restaurant is one of the best places in town to serve brunch, lunch, or dinner, so make sure not to skip it! 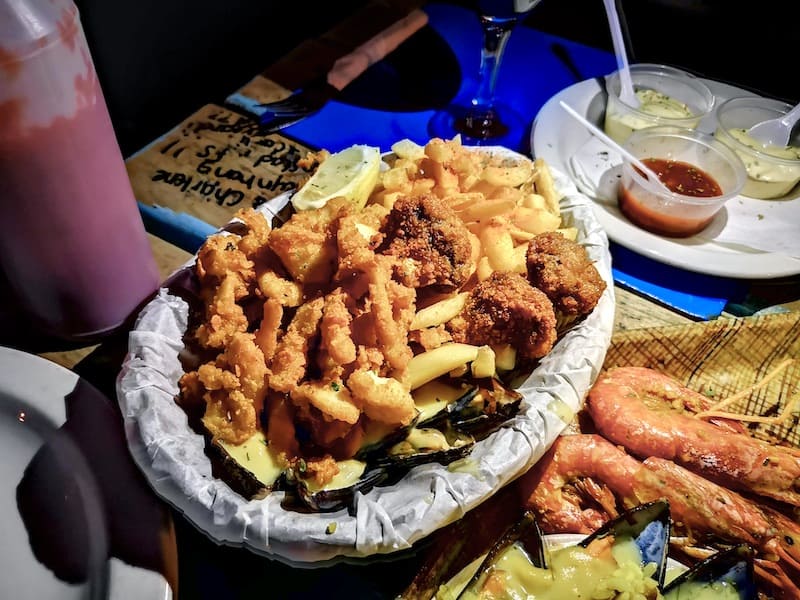 Other Things to Do in One Day in Cape Agulhas 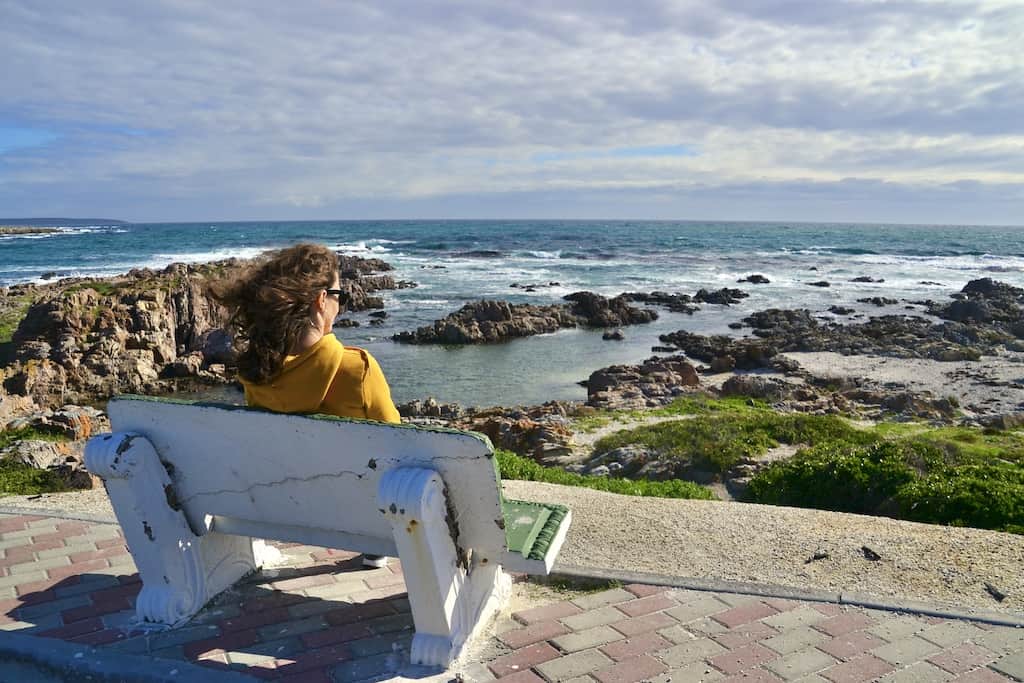 The nearest town is the lovely fishing village of Struisbaai, only 5 kilometers away, and a lovely walk on the longest white beach in the southern hemisphere is something you don’t want to miss! It’s also where you can go for a swim as the Cape Agulhas coastline is quite rocky and the winds are rough!

Sprawling between Gansbaai and Agulhas, the Cape Agulhas wine route, it’s waiting to be discovered! Are you spending only one day in Cape Agulhas? Then, wine tasting might be one of the best things to do! Close to Elim, the Black Oyster Catcher Winery is a great place to sip a glass of wine.

Whale watching is a must in South Africa and Hermanus is the best place to do it. You can embark on a boat to witness these beauties by sea, take a Cessna plane to watch them by air, or watch them from the shores. The 12 kilometers long Cliff Path offers the best viewpoints for this activity. Stop along the way, park your car and look out for whales. Sometimes they appear as close as five meters. How impressive, right?

ONE DAY IN JOHANNESBURG ITINERARY

AMAZING THINGS TO DO IN PLETTENBERG BAY