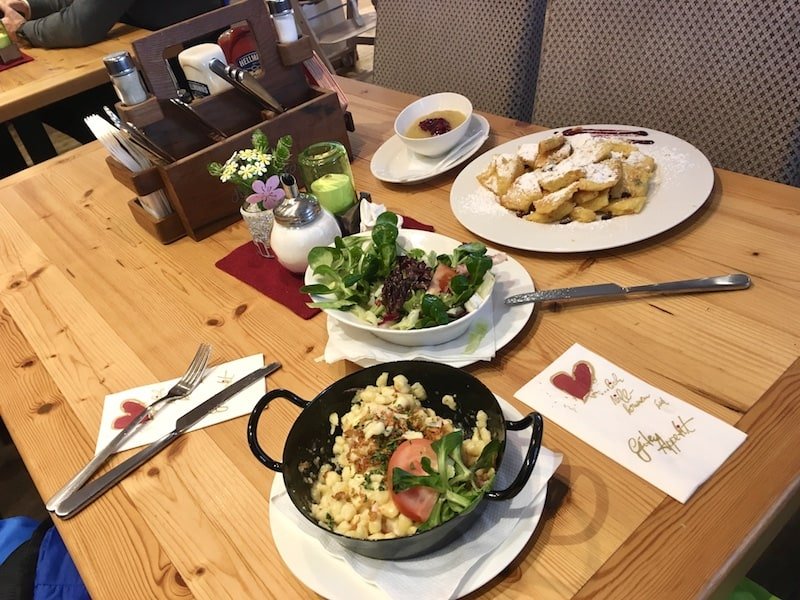 Austrian Dishes You Need To Try On Your Ski Holiday

What could be better than pampering yourself with a delicious Austrian dish after a long day of skiing, burning many calories? Find a gorgeous mountain hut with cozy rustic decor and a warm fire, and indulge in the local delicacies! The offer is vast and sometimes overwhelming, so let me introduce you to some Austrian dishes you need to try on your ski holiday! 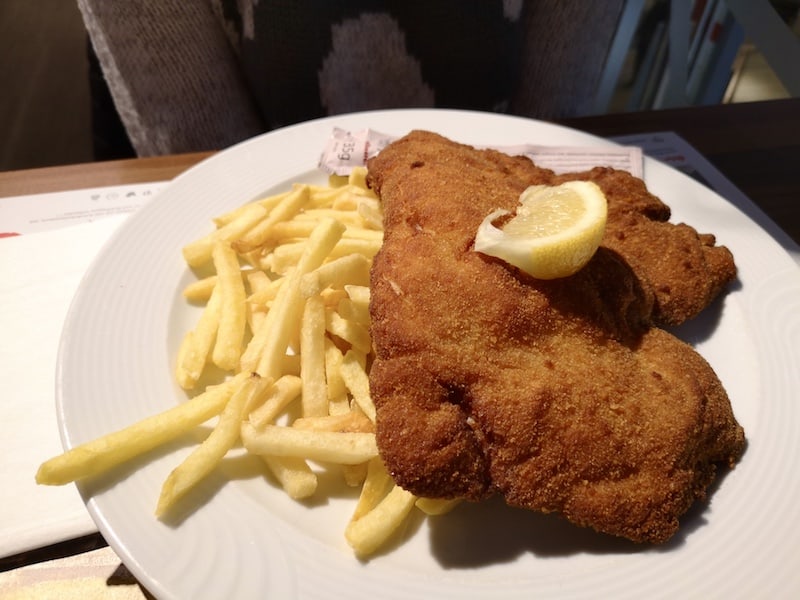 I couldn’t start this article without mentioning the famous by now “Wiener schnitzel.” Whether in a big city or a mountain hut, you’ll always find this well-known dish on a menu. This delicacy has appeared in Austrian cuisine since the early 18th century.

What’s “wiener schnitzel”? It’s a thin veal cutlet (4 mm), dipped in flour, egg, breadcrumb, and pan-fried until golden. The most popular accompaniments are the traditional potato salad and the parsley potatoes. But most of the time, the wiener schnitzel comes with fries, a slice of lemon, and cranberry jam. If you wish to make this at home, remember a few tips:

If veal isn’t your thing, you’ll find the non-veal schnitzel version made from pork, turkey, or poultry, equally as delicious. No matter how you serve it, the schnitzel is one of the Austrian dishes you need to try on your ski holiday. 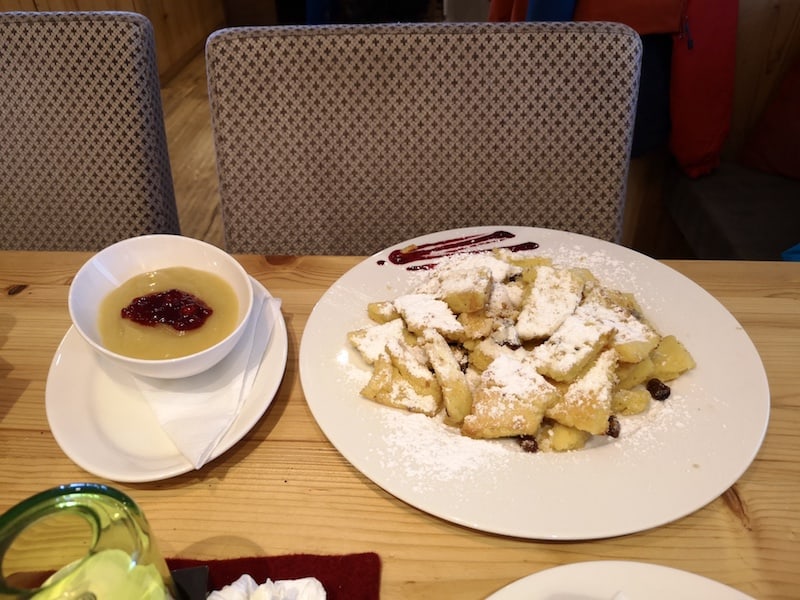 Another popular Austrian dish you need to try is “Kaiserschmarrn,” a fuzzy shredded pancake that takes its name from the Austrian Emperor Franz Joseph I, who was very fond of this kind of dish. It is believed that the recipe started as a failed pancake served one day to Empress Sissy.

Kaiserschmarrn is such an easy dish to make! First, all ingredients (flour, milk, eggs, salt, and sugar) are whisked for the pancake dough until a liquid is created. Next, the dough is poured into a pan and fried. Then the pancake is turned over with a spatula and pan-fried until brown. In the end, the pancake is chopped and served with icing sugar, raisins, and plum or apple jam.

A ski holiday means to pamper with culinary delights! Kaiserschmarrn is an excellent treat after a long day of skiing, so make sure to try it! This sweet dish can be served both as a main course and dessert. 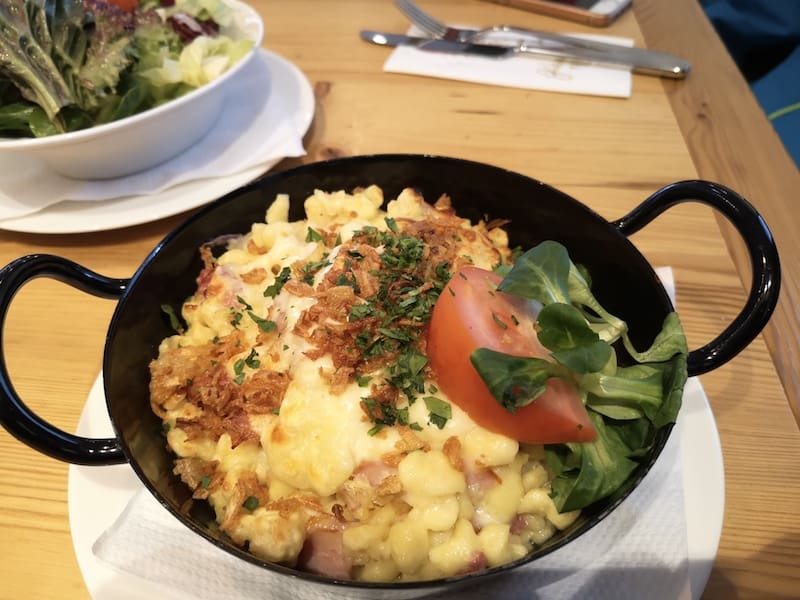 Another popular dish served in the mountain huts is “Käsespetzle” or “Macaroni & Cheese,” the Austrian style. Also known as “Käsknöpfle” in Voralberg, “Nockerl” in Vienna, and “Kasnocken” in Salzburg, the noodles are thick in some parts while tiny in other regions. The cheese is usually Emmentaler and Bergkäse. Anyway, you’ll serve them; they are incredibly delicious. So, if you love noodles, cheese, and caramelized onion, this course is for you!

The homemade noodles and the shredded cheese are layered on top of each other and garnished with caramelized onions. The course is placed into the oven for 10 minutes or so for the cheese to melt. Side dishes are usually leaf salads or potato salad.

You’ll find this specialty in the Alps, and it is definitely one of the dishes you need to try on your ski holiday. 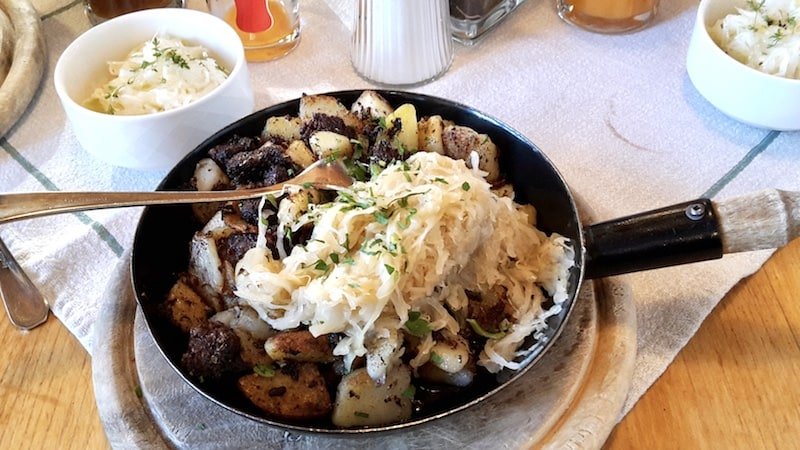 Well, this Austrian dish is not to everyone’s liking. “Blutwurst” is basically a sausage made with fresh pork blood. Yes, it doesn’t sound yummy, but try it, at least while you’re on your holiday. You’ll like it!

The sausage made from fresh blood is an-old Austrian dish, and it is considered one of the oldest sausage types. It’s nearly healthy if you think better since it does contain many nutrients like protein, iron, magnesium, and zinc.

The blood sausage is filled with pork meat, bread, onions, fat, spices and salt, cooked cereals, and blood. It’s then cooked or dried and mixed with a cylinder until it’s dense enough to thicken when cooled.

You’ll find this Austrian dish in many forms. It’s often served warm, pan-fried, and with a garnish of pickled cabbage (Sauerkraut) and potato dumplings (Knödel). In other cases is served cold, thinly sliced on bread, with mustard and horseradish. 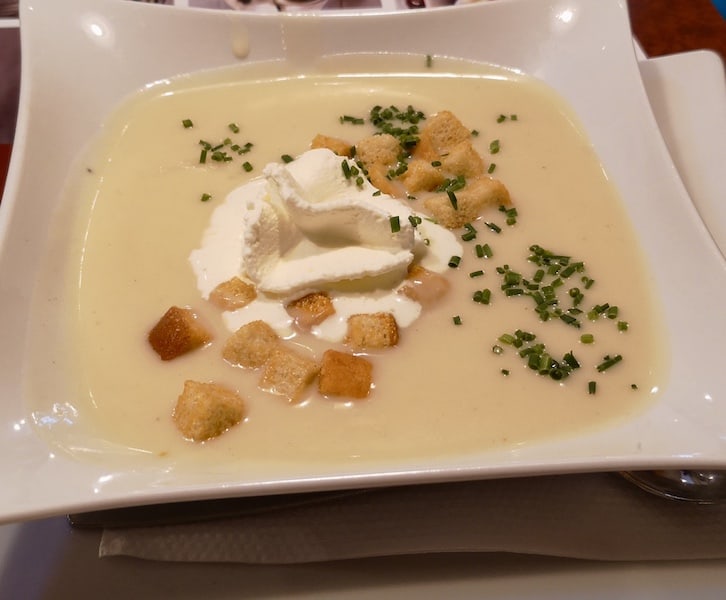 There is a vast selection of soups you can choose from in Austria: Gulashsuppe, more a Hungarian dish, but very popular in the Alps, Liver dumpling soup, or Semolina Dumpling Soup (Griessnockerlsuppe).

In my opinion, the “Knoblauchcremesuppe” (the creamy garlic soup) topped with crispy, dark bread is the best option for a day spent in the cold. It’ll warm you up and fill you up. You can find this dish in many countries, but the recipes are different.

The Austrian variant is quite simple: chopped garlic, vegetable stock, one bunch of chopped parsley, and heavy cream. That’s it! Simple and delicious! 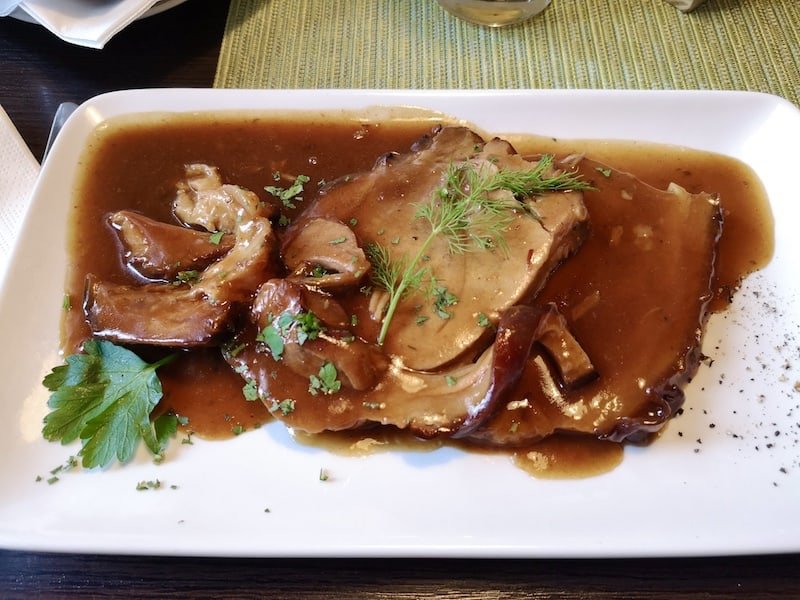 Another Austrian dish you need to try on your ski holiday is the famous “Schweinsbraten,” a Sunday dish in many Austrian kitchens.

What’s this? It is pork meat seasoned with salt, pepper, garlic, and caraway seeds roasted slowly in a rich sauce for a long time. Once cooked, the meat is sliced, the sauce is poured over and served with traditional sides like potato dumplings (Kartoffelknödel) or pickled cabbage (Sauerkraut).

The meat comes from traditional pig breeds, but the best ones for this type of food are Mangalitza and Turopolje. The typical roasts used for this dish are the neck, the back, the shoulder, or the ham.

If crispy is your thing, you should try “Krustenbraten”: the meat is roasted until it gets a beautiful rose crust. 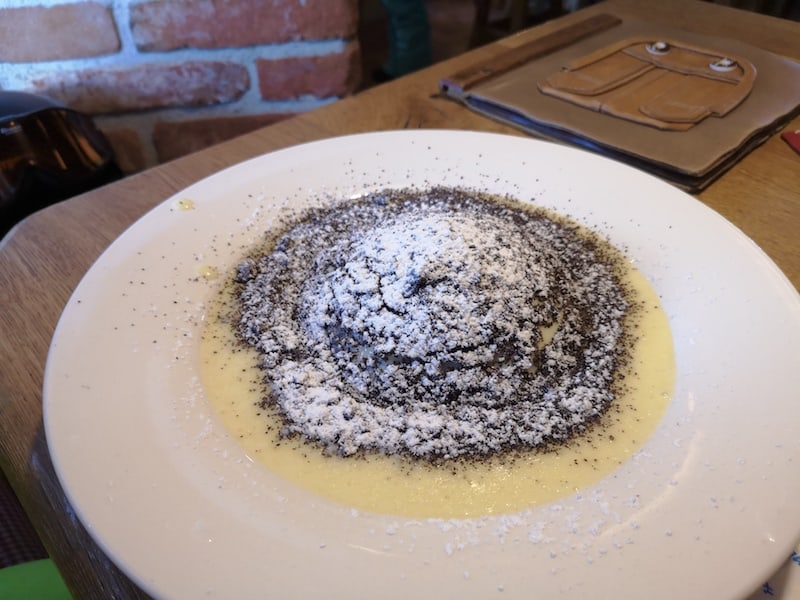 You can’t leave Austria without tasting the famous “Germknödel”! It is a fluffy yeast dumpling filled with plum jam, topped with a mix of sugar and poppy seeds, and served with melted butter or vanilla sauce.

For the best experience, go for the one served in a creamy vanilla sauce. Although you might think this one goes as a desert, you can have it as a main dish. This meal is so consistent that you won’t have to worry about getting hungry any time soon. 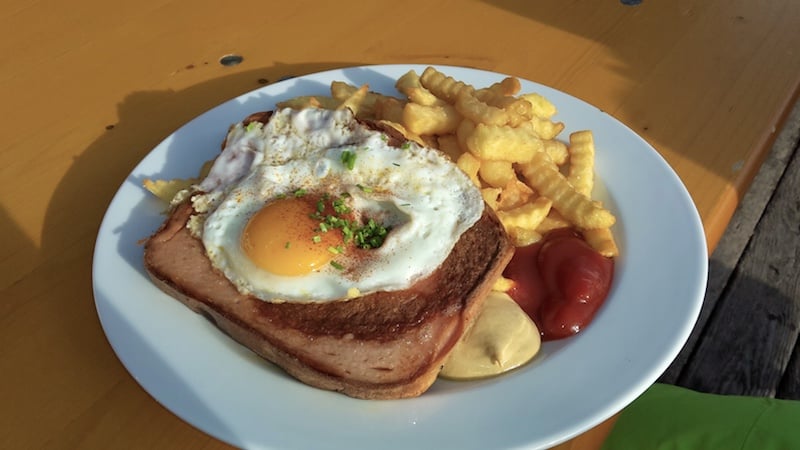 If you’re looking for something quick, easy, and tasty, you need to try this dish. Austrians love to eat the “Leberkäse” thick-sliced, warmed in a pan, topped with a fried egg and some fries beside. The leberkäse is cut hot right out of the oven in the street food version and served in a crusty bread roll with a ketchup and mustard dash. Eighter way, it’s delicious!

Leberkäse translates as “liver cheese,” which sounds not so appealing. In reality, it contains neither liver nor cheese, only corned beef, pork, bacon, and onions. The ingredients are mixed until they become a compact and smooth mass, then compressed into lumps. Finally, the leberkäse is baked in an oven until it gets a rust-colored coat.

As it’s cooked quickly, you’ll find it in every mountain hut, so make sure to try this faithful companion to a couple of biers. 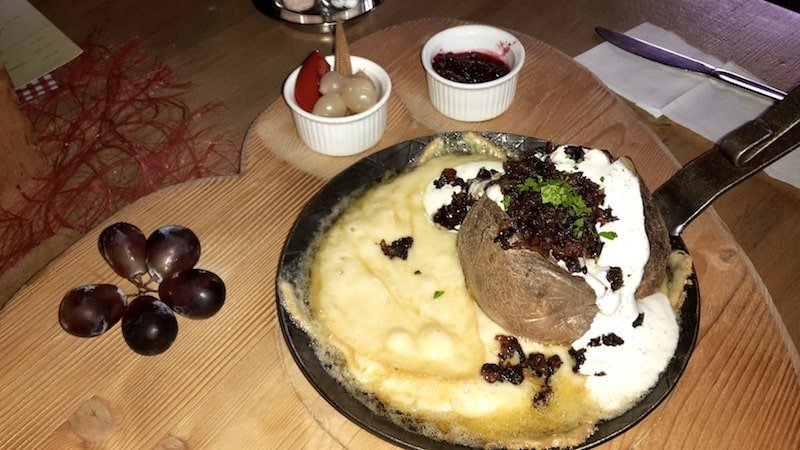 Another Austrian dish you need to try is the “Ofenkartoffel” or “baked potato,” a small snack that goes well with grilled meat dishes or salads. But sometimes, the baked potato alone is the main course.

It is seasoned with various herbs, wrapped in aluminum foil, and prepared in the oven for almost one hour at 200 degrees. When removed from the oven, the foil is opened, and the potato is cut lengthways and covered with a chive sauce. The skin gets a beautiful aroma from rosemary and other herbs.

Sometimes, the potato is boiled for ten minutes and baked for 20 more minutes in the oven, but besides losing nutrients, it does have a different taste because of the pre-cooking.

My favorite combination: baked potato with a delicious filling made from vegetables and cheese. Simply the best! 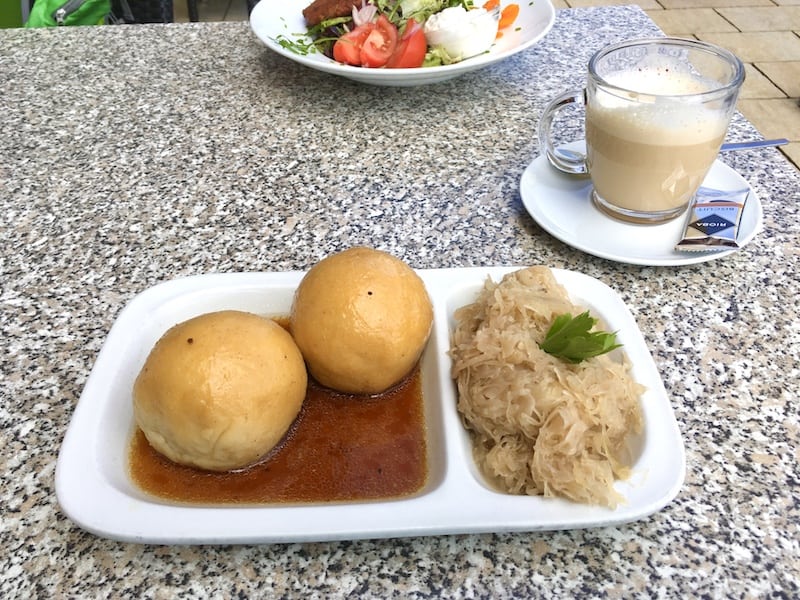 Another popular Austrian dish you need to try on your ski holiday is with no doubt the “Knödel” or “Dumpling .” Most of the time, the knödel is accompanied by the Sauerkraut or pickled cabbage.

There are dozens of varieties, but this dish is simply delicious eighter way you’ll have it!

The most popular, “Semmelknödel” or “Bread dumpling,” is made of dried bread rolls soaked in milk, parsley, eggs, onions, butter, milk, eggs, salt, and pepper. The dough is rolled into balls, which are then boiled. Try this dish with a mushroom sauce, and you won’t regret it!

Another variation of the Semmelknödel is the “Serviettenknödel” or “Napkin dumpling.” The recipe is standard, but the dough is rolled into logs and then cooked. Only after steaming the serviettenknödel is cut into slices.

“Speckknödel” or “Bacon dumpling” holds the same recipe with an addition of cooked bacon.

THE LONGEST SKI RUNS IN AUSTRIA

No Time to Read Now? Save It for Later! 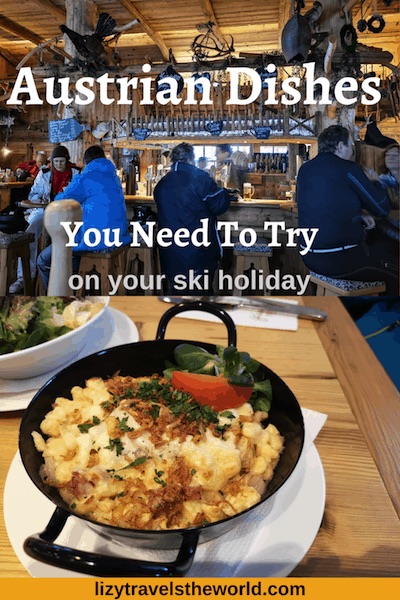